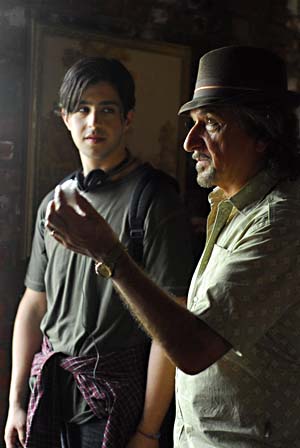 In the early Nineties, you couldn't get a sweeter seasonal jam than DJ Jazzy Jeff and the Fresh Prince's "Summertime." This coming-of-age comedy, set in New York circa the summer of '94, uses the song to good effect, although its ode to fraternity, fly ladies, neighborhood barbecues, and family reunions couldn't be further from the reality of Luke Shapiro (Peck). He's a rap-obsessed white boy, friendless and estranged from his parents, a 17-year-old outcast and dope dealer who trades weed for sessions with his middle-aged, self-medicating shrink, Dr. Squires (Kingsley). Over the course of the summer, Luke and Squires, who's close to cracking up, become friends. They bond over their romantic woes – Luke is obsessed with Squire's casually cruel stepdaughter, Stephanie (Thirlby), while Squire's marriage to the chain-smoking, near-catatonic Kristin (Janssen) is fissuring. Janssen's screen time is negligible, but it's an unsettling, under-the-skin performance. She plays the trophy wife like a bone stripped of its meat – hard, inscrutable, and chipping – and it's not difficult to imagine the future of her equally remote daughter (she's but four years at Sarah Lawrence, a brief stint at a Manhattan publishing house, and a couple of failed marriages away from becoming her mother). They're a fascinating pair, but they're not the primary (or even tertiary) concern of writer/director Levine (who previously directed the Austin-shot, as-yet-unreleased All the Boys Love Mandy Lane); the women serve merely as the starter fluid for the men's spectacular flameouts and phoenixlike risings (okay, maybe more Central Park pigeonlike risings). The Wackness' real modus operandi is in exalting the odd couple of Squires and Luke, a Mayor Giuliani-era Falstaff and Hal who just want to act up in a city that's clamping down. It takes some time to get used to both of their performances – Peck's blank face and mumbled delivery are initially off-putting, while the scraggly haired Kingsley sounds like an Eastern European refugee and looks like he belongs in some Cuban bodega, sipping mojitos. But once they get their sea legs, the film hits an easygoing, freewheeling stride, bopping to the beat of an era-specific soundtrack of Biggie and A Tribe Called Quest. The Wackness never lives up to the Fresh Prince's high standards – this isn't a "groove slightly transformed" or a "bit of a break from the norm" – it's standard, straight-outta-Sundance indie fare, but it's also a crowd-pleasing portrait of boys-who-will-be-men-who-will-be-boys.