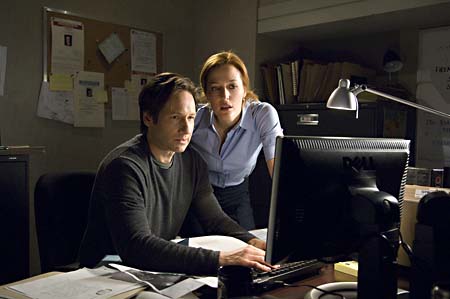 The X-Files: I Want to Believe

There's something horribly amiss with a film that feels as though it had been adapted from the anonymous-fan-fiction slush pile and then, midway through, makes you wish that it were adapted from the anonymous-fan-fiction slush pile subheaded "Furries." But there you go: Mulder (Duchovny) and Scully (Anderson) are nothing if not master and mistress of the painfully engorged tease. In the 10 years since the first X-Files film and the six since the Fox TV series concluded, reality has caught up with the conspiracy theorizing of series creator Chris Carter and, in all but the most trivial ways, surpassed even his most speculative fictions. (Indeed, the best example to date arrived last week, when Apollo 14 astronaut and probable Spaced fan Dr. Edgar "Right Stuff" Mitchell revealed that aliens do exist, there is a huge government cover-up globally, and Whitley Streiber was right all along. True, the revelation arrived during a radio interview with the UK heavy metal mag Kerrang!, but consider the source, not the sender, and certainly not Voivod.) Things have changed. Former FBI agent Fox Mulder, for instance, has grown a beard and gone underground, while his former partner, Dana Scully, has returned to her initial calling as a pediatric physician. It takes the abduction of another Bureau member and the bloody tears of a psychic, pederastic priest (Scottish comic Connelly) to bring them together, but their reunion is less than thrilling, mired for much of the film's running time in a morass of overrequited anti-lust. They've become deadly dull, these two once-keen buckers of bureaucratic BS, and watching them interact on screen is akin to having your pleasure centers removed by knobby little aliens whose only knowledge of mankind comes from Jack Webb's stoically unvarying television incarnations. Granted, a last-minute deus ex machina involving malfunctioning hydraulics on a snowplow and a ravening, two-headed Canis Maximus injects some snarly fun into the otherwise intolerably windy proceedings, but it's not enough to merit belief in anything other than Carter's conspiratorial irrelevance. 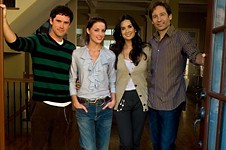 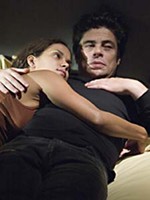 Things We Lost in the Fire
This film starring Halle Berry and Benicio Del Toro is an impeccably constructed and perfectly paced drama of domestic and internal volatility.