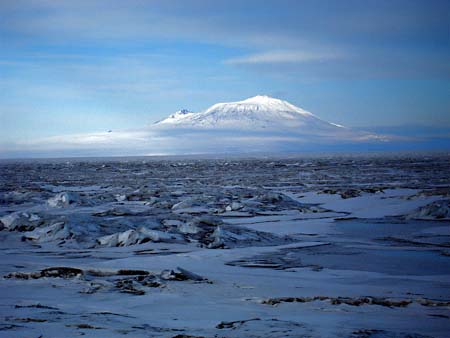 Encounters at the End of the World

I have an idea for a terrific new board game – for kids of all ages!. It's called Where in the World Is Werner Herzog? Players will roll spherical dice (I'm thinking of making then the same shade as Klaus Kinski's icy blue eyeballs) to advance on a circuitous, ill-defined route across a global playing field pockmarked by various obstacles that symbolize adversity, absurdity, cosmic cynicism, and the occasional, albeit fleeting, moment of ecstatic truth. In the end, no one wins, but no one cares because getting there is half the fun, and half the fun is better than no fun at all. Herzog, contemporary cinema's most consistently lyrical examiner of the (in)human condition, returns to the documentary form in yet another wonderfully improbable locale: Antarctica, the literal bottom of the world. In the past, the director has scaled the heights of Machu Picchu (Aguirre: The Wrath of God), macheted a path through the Brazilian rain forest with a steamship and "best fiend" Kinski in tow (Fitzcarraldo), and abandoned the Earth altogether in favor of a space-y Brad Dourif (The Wild Blue Yonder). Here, Herzog travels to a place where compasses are useless, the climate is negative 70 degrees Fahrenheit and white all over, and a community of misanthropic misfits not unlike himself lounge around watching an endless series of doomsday movies on DVD. It's somehow heartening to see that the cream of mankind's scientific community spends its off time zoning out on Gordon Douglas' 1954 giant ant flick Them, but Herzog, narrating in his engagingly stoic, German-inflected monotone, can't wait to get away from Antarctica's McMurdo Station research center, which he views as a climate-controlled "abomination, complete with an aerobic studio, bowling alley, yoga classes, and ATM." Not for him the commissary's "Frosty Boy" frozen dessert dispenser. He seeks the blank, unknowable chaos of nature in the raw, and, toward that end, he explores both above and below the frozen Ross Sea, with visually stunning results. Encounters at the End of the World's title is both literal (there's nowhere to go but up) and metaphorical (the scientists he meets are a happily cynical lot regarding climate change and the potential extinction of Homo sapiens), and Herzog is in full-on nihilist mode. Repeatedly alluding to fluffy Oscar-winner March of the Penguins, he badgers an imperturbable marine biologist, David Ainley, about the possibility of gay or possibly insane penguins before training his camera on a single male specimen which, for reasons known only to the waddling bird, forsakes his sea-bound herd and begins to wander off in the wrong direction "toward certain doom." Yes, it's a heavy metaphor for modern man's own maddened march into the abyss, as is the lingering shot of a downed helicopter, skids-up and half-frozen-over in the snow, but Herzog's mordant monologue on the end of days runs counter to the natural splendor that surrounds him and suffuses every frame of his film. You get the impression that he believes wholeheartedly the planet will be better off without us. Nosferatu that we have proven ourselves to be, he may be right.

Encounters at the End of the World, Werner Herzog