After his disastrous outing in 2002 with The Adventures of Pluto Nash, there was no direction for Murphy to head but up in terms of another space alien movie. Indeed, Meet Dave is a step up, but that's only in relation to Pluto Nash. The new film is mildly amusing family entertainment, but when discussing the career of one of our most seasoned comic actors, "mildly amusing" can only be regarded as a letdown. Murphy ekes out a few physical laughs in this high-concept comedy, but nothing about the situation or the other characters equals his contribution. This time out, Murphy reduces the number of characters he plays from the usual half-dozen or so to only two: the captain of a ship of lilliputian visitors from outer space, who come to Earth seeking water to save their home planet, and the spaceship itself, an inanimate object that has been built in the form of a human being and is operated by the tiny crew members perched within its bowels. (Heh, heh; I just said "bowels" – and I thought there weren't any crass defecation jokes this movie neglected to include.) Dubbing himself "Dave," the white-suit-clad spaceship (the aliens learned about Earth life from a tape of Fantasy Island) encounters a host of fish-out-of-water situations. Not understanding social cues, Dave makes constant faux pas and gets into trouble, although he is somewhat sheltered by a single mom (Banks) and her lonely son (Myers), who regard him as a mere "goofball." Dave (or the captain putting words into his mouth) starts to have feelings for his earthling friends and dangerously postpones his departure, while back on the ship a mutiny is brewing because of the captain's dereliction of duty. Apparently, Earth causes these visitors from the planet Nil to behave strangely, in all sorts of ways. However, behavioral consistency is not one of this movie's characteristics (unless, of course, you count Murphy's comic denigration of homosexuals throughout his career to be a sign of consistency, in which case you can view Meet Dave as hewing to the pattern). "For Nil," the space invaders declare back on the ship when they need a boost. It might as well be the movie's epitaph. 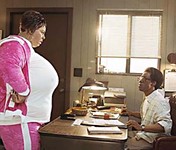 Norbit
The three personas Eddie Murphy adopts in this film literally fill the screen, but the script doesn't serve his multidimensional talents.