It's not perfect – thank Satan! – but Hellboy II: The Golden Army is by far the most splendidly imaginative and creatively uncorked piece of fantastic cinema since the director's Pan's Labyrinth netted an Oscar trifecta in 2007. Given the success of that film, del Toro's budget is considerably larger this time, allowing him to indulge his genius for the freakish – Hellboy II is a visually breathtaking bestiary of everything that ever lurked under your childhood bed – while fleshing out (or in the case of the aquatic Abe Sapien, upscaling) the "big red one" and his pals at the Bureau for Paranormal Research and Defense. Co-scripted with wild abandon and plenty of heart by del Toro and the comic book's creator, Mike Mignola, this second Hellboy film outing finds the stogie-chompin', pussycat-lovin', Tecate-swillin' hell spawn defending an unsympathetic-as-ever mankind from the underworldly evils of bone-china-complexioned Prince Nuada (Goss, looking an awful lot like Edgar Winter's melanin-deficient offspring). Nuada seeks to own a golden crown which will allow him power over the legendary army of the title – a massive, subterranean legion of mechanical warriors that could tip the balance between man and not-man. Evil never rests, sure, but neither does Hellboy, who, along with his conflicted and eternally flaming love Liz (Blair), intellectual piscine Sapien (Jones, Pan's Fauno), stodgy bureaucrat Tom Manning (Tambor), and ectoplasmic newcomer Johann Krauss (Alexander and Dodd, voiced by Family Guy's Seth MacFarlane), gives as good as he gets. There's much here for longtime fans and Hellboy newcomers to enjoy, not least of which is a perfectly pitched drunken duet by Hellboy and Sapien, to Barry Manilow's "Can't Smile Without You," no less. Both characters are having disparate relationship difficulties, but Sapien's bivalve heart, which has fallen for Prince Nuada's sister Nuala (Walton), is arguably the more achy-breaky. This brings us to del Toro and Mignola's ongoing theme – echoed in any number of superhero films and formats – of monsters who are more human than the flesh-and-blood humanity that surround them. That dichotomy has, of course, been a staple of cinema fantastique at least since James Whale's The Bride of Frankenstein (Karloff's "We belong dead" micromonologue can be briefly spotted here), but del Toro brings it front-and-center, imbuing these permanent outsiders-cum-saviors with a genuine emotional range and appeal that was rarely present in Mignola's original Dark Horse comic books. Crammed to bursting as it is with all manner of beasties and several subplots – a lengthy sequence in an underground troll market makes the cantina scene in Star Wars seem lazy by comparison – del Toro's film occasionally suffers from the fact that there's almost too much to keep up with. Complaining that you're sometimes overwhelmed with astonishing visuals and strange tales, however, is like whining there's too much icing on your birthday cake. All fantastic films should suffer such a fate. 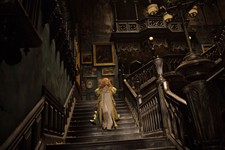