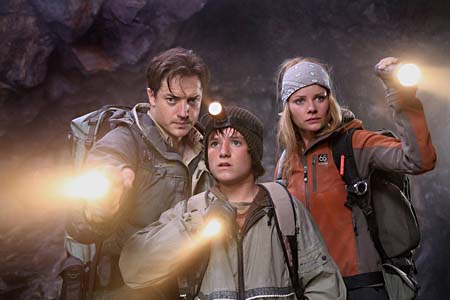 Journey to the Center of the Earth

Make sure to catch this latest iteration of the Jules Verne novel on a screen projecting it in 3-D format (some prints are 3-D, others regular 2-D), because without all the fun visual effects of stuff "comin' right at ya," this journey's center will not hold. Seemingly created to whet the audience appetite for a new age of digital 3-D (technological advances have recently improved the 3-D landscape – and the studios and exhibitors sure like the opportunity to remind us they have some big-screen tricks up their sleeves that can lure us away from our home-entertainment consoles), the filmmakers have paid little attention to character development or the screenplay, trusting Verne's far-fetched fantasia about the inner-Earth biosphere to carry the day. And for the most part, it does. Early scenes accustom the viewer's eyes to the 3-D phenomenon with yo-yo tricks and a memorable spit take shown from the point of view of the sink drain. These moments prepare us for the eventual experience of such things as 3-D dinosaur drool, carnivorous plants, piranhalike fish incisors, roller-coaster runs down mining transport tracks, an iridescent flock of birds, general free falls to the center of the Earth, and more. When the action is in the foreground, the film's visual thrills provide fun gasps and the feeling of a genuinely collective moviegoing experience. But the backgrounds generally look like 2-D matte paintings, and when combined with the hellzapoppin' happenings in the foregrounds, the finished look appears dull and desaturated. Brevig, a visual-arts coordinator making his first film as director, has been handed the reins of this sci-fi classic, a job appointment that probably predetermined the film's balance in favor of its graphic aspects. Verne, despite his visionary insight into so many futuristic things, kind of missed the boat with his goofy concepts about what resides at the center of the Earth. The dinosaurs and parallel, navigable tunnels alongside the magma are all Verne and can't be blamed on the imaginations of the overeager filmmakers. Perhaps the utter nonsense of it all is what makes the story ripe for eternal retelling. In Brevig's version, three central characters carry essentially the whole movie on their own: scientist Trevor Anderson (Fraser, who's become the studios' favorite go-to guy for family-friendly fare that nevertheless needs a muscular male hero), Trevor's nephew Sean (well-played by Hutcherson), and beautiful Icelandic mountain guide Hannah (Briem). The threesome often face their peril like some kind of chipper Swiss Family Robinson below the Earth's crust, but the quick 92-minute running time keeps the action moving chockablock forward to every new set-piece. No follow-up to Middle-earth, this Journey to the Center of the Earth provides tepid but fun entertainment. 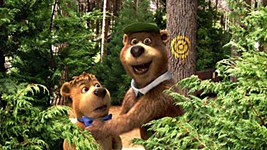 Yogi Bear
This mixture of animated talking animals and live action is unbearable.