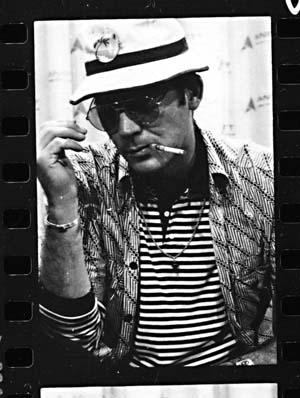 It would hardly be surprising if the most brazen and incisive words ever spoken by Hunter S. Thompson in a life full of brazenness and incisiveness turned out to be about himself. After all, Thompson was his own greatest subject and muse, the refracting lens through which Las Vegas and the 1972 presidential campaign and the Kentucky Derby gained their meaning, and the means by which he turned American journalism on its ear. Looking at the larger-than-life character he had become by the mid-Seventies – the mad, solipsistic Rolling Stone reporter stalking the high, the mighty, and the square, armed to the teeth with guns, drugs, booze, a cigarette holder, and a typewriter; the self-proclaimed and self-invented “Gonzo journalist” – Thompson tells an interviewer: “I’m really in the way as a person. The myth has taken over. It would be much better if I died. Then people could take the myth and make films.” And though films celebrating the Thompson myth were made while the man was still alive – notably 1980’s Where the Buffalo Roam and Terry Gilliam’s phantasmagoric Fear and Loathing in Las Vegas – Gonzo is the first since the writer elevated that myth to legend by committing suicide in 2005. It’s also the first to try to put his enormous, egocentric, violent, patriotic, insatiable, schizophrenic life into some sort of context. To do so, Gonzo director Gibney frees himself from the heady topicality of his recent documentaries such as Oscar-winner Taxi to the Dark Side and Enron: The Smartest Guys in the Room and dives right down into the deep – and dark – end. Using historical footage, the writer’s own words (read by Johnny Depp), even the occasional (and approximating-drug-addled) CGI effect, he aims to capture the contradictions and fervent outsider energy that fueled Thompson’s long career, from his first-person account of riding with the Hell’s Angels to the street rebellion outside the Chicago Democratic National Convention in 1968 (where Thompson watched the “American dream get clubbed to death”) and his travels with George McGovern during the carnivalesque 1972 presidential campaign, the assignment that took Thompson the rabble-rouser and defiler of objectivity, sobriety, and all other things journalistically holy from mere mortal to self-indulgent deity, a conversion that would eventually doom him, first as a writer then as a human being. And though Gibney and his brilliantly motley cast of interviewees – including former President Jimmy Carter, fellow rebel journalist Tom Wolfe, and, best of all, conservative icon (and loyal soldier of Thompson’s mortal enemy, Richard Nixon) Pat Buchanan – do their best to humanize a man known as a “walking monument to misbehavior,” there’s a nagging sense throughout Gonzo that, despite his late-life decline into caricature, Thompson was too complex, too self-mythologized, too big, too American to ever fit onscreen – especially in a movie aiming for “objectivity,” which was, for Thompson, the worst of all possible words. 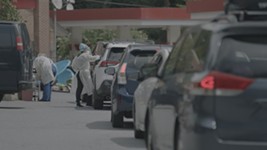 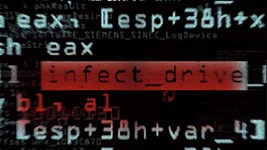