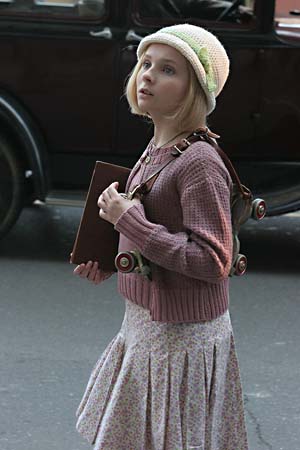 I don’t have any children, but I played one in my childhood. As I remember it, one of the few places a kid could exert any control was in her fantasy life: in the way she invented for her dolls exposition, conflict, triumph, denouement; deeds both noble and nefarious; and a small-scale reproduction of the Galactic Empire's storming of the planet Hoth. But those were more rough-and-tumble, pioneering days; in these modern times, we have American Girl to ease the overtaxed imagination of a child. American Girl supplies, alongside each of its era-representative dolls, detailed historical backstories, and should that allow still too much room for fancifulness on the part of little girls, the American Girl industry has helpfully produced such supplemental materials as related books, clothing lines, doll-care accessories, themed restaurants, and stage shows. And now this – a feature-length theatrical film about Kit Kittredge (Breslin), a onetime doll now come to life as a washed-out blonde in cute, Depression-era hats and about whom one might lazily toss around words like "spunk" and "pluck." A 9-year-old aspiring reporter, Kit spots a story – and her first byline – in the swelling of hobo shantytowns in her native Cincinnati. But then the Depression hits rather nearer to her home when her dear father (O'Donnell, ageless as a Ken doll) loses his car dealership, and her mother (Ormond, graceful and maternal after all those quivering-lip ingenue roles) must open the family home to an eccentric mix of boarders. Kit Kittredge isn't terrible: There is a handful of supporting players, like child actors Mills and Smith, who sparkle, and it seems rather churlish to complain about entertainment aimed at little girls, who almost never get big-budget movies made just for them. But considering director Rozema previously made the revisionist Mansfield Park (quite marvelously turning Jane Austen's Fanny Price into a protofeminist), one rather hoped she might have been equally ingenious with the considerably less worthy material here. Nope, Kit Kittredge is a dutiful bore. Still, I couldn't help but wonder if, in the face of all-out market collapse, it might serve a dual purpose as primer for kiddies on economic depression – because food stamps always taste better with a side order of spunk. Or is it pluck?