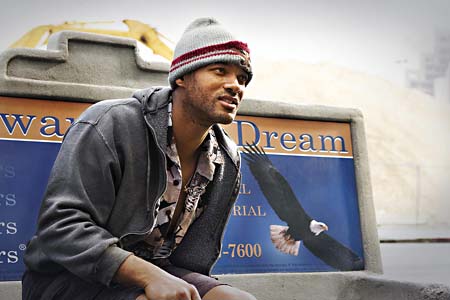 From its opening shot of recalcitrant superhero John Hancock (Smith) sleeping off a permanent hangover on a Los Angeles bus-stop bench to its raggedy, barely explicable backstory, Hancock is a godforsaken (possibly literally) mess. It's been tagged by press and publicists alike as Will Smith's bid for edgier fare and a marginally darker screen persona, but Hancock, with its tied-in-a-bow, patently dull outcome and yawny midsection, makes Smith's 1990 sitcom breakthrough, The Fresh Prince of Bel-Air, look positively transgressive by comparison. And, too, there's the questionable, prefab edgelessness inherent in making this kinda-sorta last action hero an alcoholic black man who is despised by an unappreciative citizenry (and also by making, later, his equally super paramour a white, stay-at-home soccer mom). Berg, working from a script that's none too clever by half (courtesy of Vy Vincent Ngo and The X-Files' Vince Gilligan), strains toward some sort of message, but what is it? At times you can almost feel the social critique pooling beneath the film's surface. But unless the message is that with great power comes vast amounts of booze and self-loathing – a superheroic subtext already delivered with far more pathos, thrills, and humor by Iron Man earlier this summer – then Hancock misses its target by a country mile. As vacuous summer cineplex junk food goes, it's none too festive either, although I've got to admit the sight of stubbly, irritable Hancock rescuing a CGI whale by flinging it off the beach and onto a hapless sailboat far out at sea is a gag whose time has finally arrived. Hancock's punitive salvation arrives in the most unlikely of personas: Bateman's suburban PR man, Ray, is Jerry Maguire minus the desperate, pond-scum algae bloom of bitter, endless self-recriminations. Instead, Ray seeks to buoy his own world-saving ends via Hancock's redemptive means, which is a weird enough message if you've ever been on the short end of a PR flack's star-maintaining truncheon. Alas, Hancock is chock-full of nonexposition, leaving you to wonder about its protagonist's obsession with eagles; whether or not he's a god, an angel, or an alien; and why on earth anyone would want to waste a summer matinee afternoon with Hancock when they could get wasted with Shakes the Clown in the DVD privacy of his own lair. To quote Philly's former Freshest, "Yo homes, smell ya later."