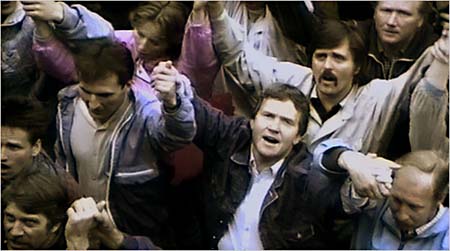 Considering they’ve spent the better part of the last 1,000 years under foreign thumbs, you have to marvel at the Estonian people’s ability to keep a song in their hearts, as Richard Rodgers might say. First the Germans, then the Danes, then the Swedes, then the Poles followed by Russian Czars, Soviet Communists, Nazis, and the Soviets again (just for good measure): They all had their way with this tiny country sandwiched between Russia and the Baltic Sea … and still the Estonians kept singing their songs of freedom, confident one day independence would arrive. This is the story behind The Singing Revolution, the first film from the husband-and-wife team of Maureen and James Tusty, and it’s a doozy, full of the kind of collective passion and struggle and yearning for freedom that makes viewers well up with pride at their shared humanity. Employing a combination of historical footage and modern-day scenes of the preparations for the country’s Laulupidu festival, a concert that takes place every five years and that features upward of 30,000 singers onstage belting out songs of triumph and despair, love and country, the Tustys introduce viewers to a world seemingly beyond possibility, where the choral inclinations of a culture could rally the spirits of an entire country and help to bring down one of the most brutal empires in history. And all with barely a drop of blood being spilled. It was at this festival in 1947 that Estonian composer Gustav Ernesaks set to music the patriotic words of an 18th century poet named Lydia Koidula, “Land of My Fathers, Land That I Love.” Defying the edicts of their totalitarian rulers, the choirs at Laulupidu drowned out the propagandistic sounds of the Soviet brass bands with the strains of their new national anthem, thereby putting the “La Marseillaise” scene in Casablanca to shame and planting the seeds of a revolution that would grow over the next 30 years into the full-scale independence movement of the 1980s and early Nineties. Not bad for a country that lost nearly 25% of its population to work camps, purges, massacres, and assassinations. If ever there was a story that was dying to be told, it’s this one, and this movie should probably be required viewing in the world’s classrooms (choir classes in particular, I should think), as a reminder to everyone that sometimes music is more than just music and sometimes sheer force of will is enough to topple tyrants. The Singing Revolution is a shot of unfiltered, unsentimental optimism. How often can you say that about a movie?