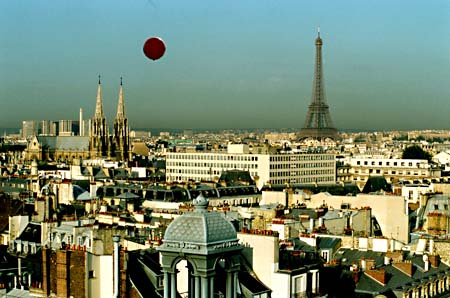 Flight of the Red Balloon

I have only the faintest recollection of Albert Lamorisse’s "The Red Balloon" – just my own sense-memory sniff of children sweating through sweaters in an overheated room watching the near-silent 1956 classic short on a day too cold and snowy to play outside. Two decades from now, I suspect I’ll have retained just as little from this contemporary homage by Taiwanese director Hou; a mere two hours later, the red balloon and its flight – which, honestly, promises more forward movement than Hou’s film ever delivers – has mostly leaked from my memory. What remains are gorgeous fragments, as when a mop-topped boy presses his face to a car window, the light and shadow playing off of him. He is Simon (Iteanu), a taciturn Parisian boy who meets his own red balloon in the film’s opening frames. Unlike Lamorisse’s child lead, Simon can’t coax the balloon into companionship; shrugging the defeat off easily, he calls the balloon stupid and heads into the subway like the sensible, city-dwelling kid he is. The balloon will resurface throughout, but far more interesting, and substantial, is the slow reveal of Simon’s domestic situation. His mother, Suzanne (Binoche), runs an experimental puppet theatre and has an unruly tenant. (The actors improvised all the dialogue on set, and Binoche, quite bravely, has created a complex portrait of self-absorption and distraction; just watch the way her every interaction, even a compliment to another, eventually wends its way back to her.) Suzanne is consumed with her new production, a dramatization of an ancient Chinese parable about a man driven to save his waterlogged lost love (“I will boil the ocean dry to find and rescue my beloved!” moans the puppet, to weirdly moving effect). There is also Simon’s new nanny, a budding Chinese filmmaker named Song (played by a young filmmaker of the same name); Song, in her slouchy pants, is a quiet, benevolent presence, carting her video camera around town as she works on her own homage to "The Red Balloon." Honestly, I could take or leave the business with the balloon, which makes for some lovely imagery but never gels thematically (it’s worth noting that the Musée d’Orsay, which cameos, commissioned the film as a riff on the original). But what I wouldn’t trade is a long take set in Simon and Suzanne’s cramped apartment, in which a blind piano tuner sets to work as a PlayStation blares, the downstairs neighbor bellows, a phone call disappoints, and Binoche’s bottle blonde nears cracking up, then beautifully pulls herself back from the ledge. It’s about as messy and vibrant as this sedate, ever-lovely looking film ever gets.