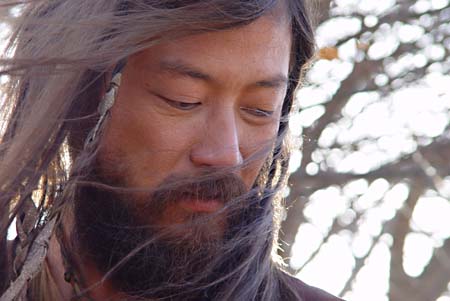 As Kazakhstan's Oscar entry for Best Foreign Language Film, Mongol is obviously that broken, beleaguered, and belittled nation's payback for the indignities inflicted upon them by Borat. Sure, they may be mired in a post-Soviet, pre-Western-bloc party from hell these days, but, as Mongol reminds us, amid much blood and thunder, no less than ultimate yurt fighter Genghis Khan once sprang from Kazakh loins. (Such lineage didn't void Khan's eventual pseudo-appropriation by Ricardo Montalban, to fine, sinew-chewing effect, in Star Trek II: The Wrath of Khan. So it goes.) Essentially the origin story of the near-mythical warrior who founded the Mongol empire (to this day the most expansive ever), Mongol focuses almost entirely on the early years of the nomadic Temudgin (Genghis Khan's birth name), who, as played with zesty panache and steely gravitas by Japanese actor Asano (of Takeshi "Beat" Kitano's Zatoichi), was every bit as much a lover as he was a fighter. After choosing his future bride, Börte (played as an adult by an equally intense Chuluun), while still a child, Temudgin witnesses the murder of his father by a rival clan; forms an alliance with a childhood savior; is enslaved by the Tangut Chinese (who keep him, doglike, in a publicly displayed cage), only to escape with the help of Börte; and from there goes on to unite the disparate tribal lands and achieve Conan-like status in all of history. Russian director Bodrov spares no expense in re-creating the world of the 13th century Mongolian steppes. The film is awash in cinematic climate change, be it snow-swept mountain passes or sweeping panoramic vistas that would give John Ford a run for his monuments, and there are thudding, groaning, horse-mounted skirmishes galore (replete with lakes of arterial CGI gore), but by the time the film's abrupt conclusion arrives, you realize you've been watching a love story and not, as some might hope, The Lord of the Rings: The Asian Edition. Asano's Khan is a hero in the classic mold, and the portrayal is riveting. Not entirely so the film, however, which concludes with a lengthy endnote as though it were Steppe Wars IV: A New Hope and Equal Plunder for All Men. I think that other great lover and fighter, James Tiberius Kirk, said it best: "Kha-a-a-a-n!" 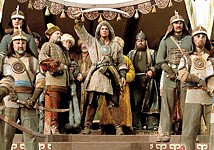