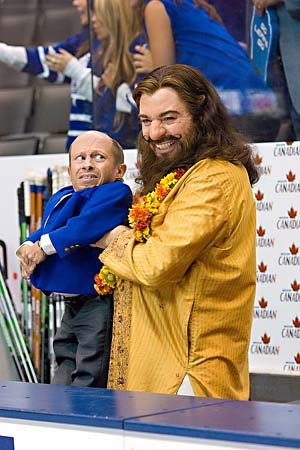 Stop me if you’ve heard this one before: A Hindu mystic travels from India to Toronto to act as spiritual adviser to an African-American hockey player whose obsession with his ex-wife’s generously endowed, mustachioed Quebecois goalie boyfriend is endangering his team’s chances of winning the Stanley Cup. This mystic – the No. 2 professional guru in the world (behind Oprah favorite Deepak Chopra) and author of a whole library of pop self-esteem guides, including I Know You Are, but What Am I – revels in pseudo-religious psychobabble, clever wordplay (intimacy = into me I see), and ridiculous pop-culture references. Oh, and he wears a chastity belt with a carved-metal elephant codpiece, and he loves long jokes about diarrhea. In other words, the Guru Pitka is a creation of Mike Myers, the same fevered sketch-comedy mind that gave us Austin Powers, Wayne Campbell, and (king of them all) Dr. Evil. Like those characters, Pitka trafficks in humor that’s heavy on self-awareness (“I was ominous just then,” he informs one adversary after saying something … well … ominous), extended scatology (no one can stretch a gag about testicles like Myers can, not even if he or she wanted to), and convoluted puns that unpack themselves slowly and from a great distance. Unlike those characters, however, Pitka isn’t funny. Not even a little bit. Unlike Dr. Evil, who wasn’t afraid to be unlikable, Pitka’s schtick is one giant cry for acceptance – eccentric but not challenging, therapeutic but not cathartic – which is absolute death to comedy. This, I’m guessing, is why Myers surrounds himself with characters whose only responsibility is to laugh at Pitka’s jokes (the primary culprits being the criminally underused Malco and the criminally overused Alba, who may or may not be a cardboard cutout of a real girl): the better to ensure that audiences don’t drift away and lose the thread of hilarity. In the end, this desperation for approval absolutely buries The Love Guru. This and the fact that it recycles gags from earlier and better Myers movies and hopes that the audience won’t notice because they’re too busy staring at Timberlake’s bursting Speedo. And then there’s the unshakeable sense that mocking self-help culture is a redundancy, like making fun of reality TV … or Republicans. Honestly, who needs Myers when you’ve got Chopra running around writing books with titles like SynchroDestiny? 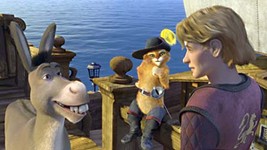 Shrek the Third
The big, green cash machine has finally run dry, perhaps not of box-office power but most assuredly of the caustic wit that made the first two films so winning.