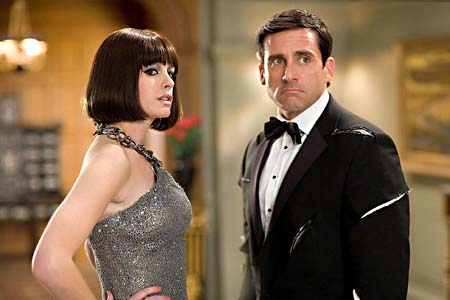 The track record for movies based on old TV shows hasn’t been pretty, yet that hasn’t stopped Hollywood from spinning the wheel on these proven concepts again and again. Happily, the new movie Get Smart survives the transition, maybe not with flying colors but at least with a respectable amount of wind in its sails. Updating this late-Sixties TV spy spoof, which was created by comedy-writing gods Mel Brooks and Buck Henry, is fraught with potential perils. Although the TV show can be grouped with such series as The Man From U.N.C.L.E. and I Spy and the movie Casino Royale as late-Sixties retorts to the James Bond fantasy and a growing American paranoia about the activities of the CIA, it was Get Smart that tweaked that government agency with an extra dash of sass and wit. The utter ineptitude of Maxwell Smart, aka Agent 86, stands as a rebuke to the idea of the infallibility of the covert intelligence agent. As played by Carell in this new film, Smart is not as big an idiot as he was in the original. Here he’s a novice field agent who’s just been promoted from his desk job as a CONTROL analyst, which explains some of his bumbling, but he can shoot his gun straight when necessary and assess situations with intelligence. Carell’s Smart also has shades of the character he plays on The Office, Michael Scott, in the characters' shared lack of self-awareness. As Smart’s partner, Agent 99, Hathaway is a spooky doppelgänger for Barbara Feldon, with her chic Chanel-like duds and confident verbal delivery. Fortunately, the movie tamps down 99’s 100% devotion to Smart as a romantic partner – a foible that would be even more inexplicable 40 years later. As good as Carell and Hathaway are, no palpable sexual tension can be perceived. The catchphrases from the original (“sorry about that, chief,” “missed it by that much,” the “cone of silence”) are all here but used with appropriate discretion in order to not wear out their welcome. This is especially evident in the early part of the movie, when the characters are at headquarters and Smart is still a desk jockey who analyzes terrorist “chatter” and longs to enter the field. Once he is removed from headquarters, Get Smart often struggles with the impulse to also be an action comedy, and the plot and the staging just don’t live up to those demands. A climax with the president (Caan) at a symphony performance recalls the conclusion of Hitchcock’s The Man Who Knew Too Much, with no other similarities to the master other than the plot device. The film reunites Carell with his Little Miss Sunshine co-star Arkin, who, as always, delivers the goods, as do most of the other supporting players. Too long by at least 15-20 minutes, Get Smart is nevertheless a giggly summer movie.