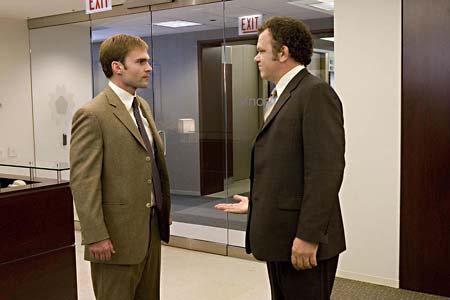 In honor of the release of their new film The Promotion, and in recognition of its curious lack of narrative cohesion or tonal consistency, the Weinstein Company and writer/director Conrad (who wrote The Pursuit of Happyness) would like to offer viewers the following distractions: a street gang terrifying patrons of a Chicago grocery store with bottles of Yoo-hoo, a gay couple exploring the erotic possibilities of the banjo, a hero with an addiction to self-help audio tapes, another hero with a secret past as a male gymnast, two different conversations about the masturbatory habits of the mentally challenged, and a long-suffering Scottish wife played by Taylor, who sounds like she’s auditioning for a part in an off-Broadway production of Brigadoon. And the result of all this absurdity? Total and forgettable and unforgivable blandness. Scott plays Doug, a neurotic grocery-store assistant manager who suffers the disinterest of his employees, the disrespect of his customers, and the haughty disappointment of his superiors with all the patience of Job and all the backbone of a nematode. He is convinced that a promotion to full manager is his (“I’m the leading shoo-in,” he tells his wife proudly) until Richard (Reilly) transfers from a sister store in Canada and threatens to take it away from him. Luckily for Doug, Richard is a mess himself, a former alcoholic and drug addict with a talent for doing and saying all the wrong things at all the wrong times. Both men are on the verge of total collapse, confronting the abyss of their own limitations and disappointments and convinced their redemptions lie in moving up the corporate ladder but just self-aware enough to realize they’re too defeated to ever really amount to anything. Theirs is the sad tale of the modern, corporate, emasculated male sublimating his ancient desires in short-sleeve shirts, plastered-on smiles, and meaningless responsibilities. Over and over again, The Promotion hints at the movie it might have been – slapstick comedy or social satire or relationship tragedy or, most promisingly, an exploration of the damaged, neutered American male psyche – if it had just bothered to decide which movie it wanted to be. Instead, it tries to be everything at once and ends up failing to be much of anything at all. And eventually all that competing and contradictory clatter – Watch Doug scheme and plot! Watch Richard drive away his wife and sink into depression! Watch both suffer embarrassment at the hands of black and Latino youth! – blends into so much white noise, until all that’s left is the lingering sense that the tragic and promising story of Doug and Richard won’t be sticking with you past the closing credits. 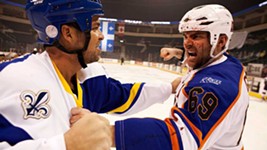