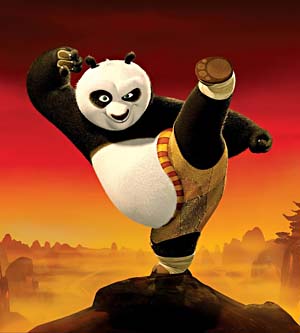 After years of skulking around in Hollywood’s shadows – writing anonymous Internet reviews, collecting Star Wars trading cards, leaking insider information about geopolitical subtext in Cloverfield – fan-boy culture finally has a movie hero to call its own. Po (Black) may be an animated panda bear, but make no mistake: Deep down, he’s really just a nerd with a pop-culture obsession. In Kung Fu Panda’s opening scene (animated in a gorgeous, throwback, two-dimensional style that suggests both the work of Jamie Hewlett and Indonesian shadow-puppet theatre), Po imagines himself as a great martial-arts master teaming up with local heroes the Furious Five (featuring a monkey, tigress, viper, crane, and praying mantis) to defeat vast and evil armies. Of course, in reality (disappointingly three-dimensional, Pixar-like reality) Po is a master of nothing; he’s just the rotund son of a noodle-shop owner living in a small Chinese village who gets his kicks playing with action figures in his bedroom. Of course, that all changes when destiny drops him at the feet of kung-fu master Shifu (Hoffman), leading to the revelation that he’s actually a “dragon master” waiting to blossom and save his village from the vengeful tiger Tai Lung (Deadwood’s McShane, who manages to go 88 minutes without uttering an obscenity, though I’d love to see the outtakes). But so what if Kung Fu Panda’s message is timeworn and clichéd (believe in yourself, even if – especially if – you’re flabby and uncoordinated and no one else believes in you)? And so what if by the time this movie hits the DVD rack, all its CGI miracles will have been brushed aside by the next animated blockbuster? No criticism by me will matter one bit to the thousands of kids who will make up this movie’s howling, lunch-box-buying fan base. With a lovable, lumpy loser as its hero, the movie is just the kind of antic David vs. Goliath tale children can’t get enough of. At the screening I attended, there was a young boy in the audience who couldn’t contain his delight during the film’s climactic battle between Po and Tai Lung, in which the bear’s bowl-full-of-jelly midriff turns into an ineffable source of cosmic power. “He sat on him again!” the kid squealed over and over, as if the secret to a happy life is watching a cartoon bear plant his big backside on the head of a cartoon tiger at least twice a day. And who’s to say he’s wrong?