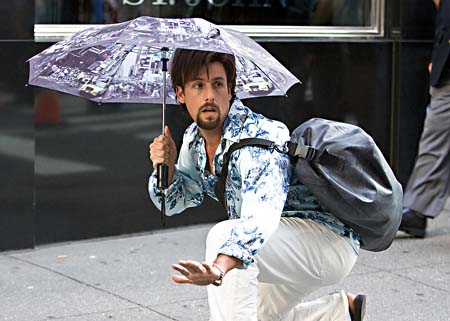 You Don't Mess With the Zohan

To call Sandler's recent catalog of films scattershot is to understate the obvious in a near-comic way. Saturday Night Live's former man-child is still Peter Panning his way through his curriculum vitae, via vile little unfunnies like 2006's Click and the wholly unnecessary remake of The Longest Yard (neither of which played to Sandler's absurdist strengths). But then, seemingly on a whim, he turned in a fine dramatic performance amid the post-9/11 melancholia of last year's Reign Over Me, a far better and more emotionally cohesive performance than the one he gave in James L. Brooks' misbegotten Spanglish or even his breakout freak-out in P.T. Anderson's Punch-Drunk Love. But honestly, does anyone really want Sandler to grow up, all the way? His most rewatchable films remain his early, borderline Dada-as-anger-management outings in Billy Madison and Happy Gilmore. Happily, You Don't Mess With the Zohan, Sandler's first collaboration with co-writer and current Hollywood comedy godhead Judd Apatow, is a crazed, delightfully bizarre return to form for Sandler. As Israel's top dawg in the secret intelligence agency Mossad, the Zohan (Sandler) is a master of the extreme sport of parkour and a tireless schtupper of his adoring female fans. He is the ultimate übermensch, both Nietzsche's and Hezbollah's worst nightmares. But (in an inspired comic riff on Al Jolson's The Jazz Singer – which precious few die-hard Sandler fans will likely get) what the Zohan really wants to do is cut and style hair for Paul Mitchell. After faking his demise in an equally inspired waterborne battle with his Palestinian archenemy, the Phantom (Turturro, comically holding his own), the Zohan moves to New York City to pursue his dream, and (some very clever) comedy ensues. As far as I know, this is the first Hollywood-made Jewish/Palestinian/immigrant comedy that also doubles as a surprisingly trenchant analysis of the Middle East's perpetual bloodbath. Would that Hamas, Hezbollah, and Ehud Olmert had Sandler and Apatow's sensibilities, we'd be seeing pie fights on the Gaza Strip. Thank goodness that, in the movies at least, following your dream actually gets you somewhere.