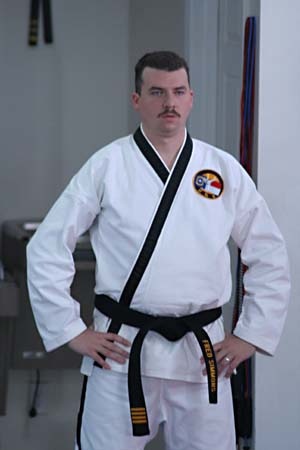 My tolerance for the mockumentary form of comedy has curdled somewhat in the wake of the past decade's serious subgenre overkill. While this ultra-low-budget faux doc about strip-mall kung-fu sensei Fred Simmons (McBride alternating between heartfelt and brain-dead), who doesn't have the sense to come out of the pain, has moments of laugh-out-loud greatness, for the most part, it plays like a Saturday Night Live sketch padded out to feature length. (Accordingly, Will Ferrell gets a "presented by" credit.) Wannabe badass Simmons alternates between bouts of barely controlled rage at the ineptitude of his young students and goofy Zen koanizing that wouldn't be out of place in a Christopher Guest mock-up, but again, both the gags and the sheer repetitive nature of the story make The Foot Fist Way seem far more punishing than any of the zany, manic physicality onscreen. The film's one saving grace comes in the form of Best's portrayal of a sleazeball Chuck Norris knockoff by the name of Chuck "the Truck" Wallace (Simmons' kung-fu idol who ends up getting fisty on both his ass and his wife). There's a rather sweet message here about not giving up on one's dreams no matter how many blows to the head you might receive, but by the time Foot Fist limps to its ultimate fighting climax, you'll likely wish you had double-teamed Game of Death and Waiting for Guffman instead. (See "Enter the Funnyman," June 6, for an interview with star and co-writer McBride.) Observe and Report
With more of a resemblance to The Cable Guy than Paul Blart: Mall Cop, this Seth Rogen comedy about a bipolar mall security guard is decidedly dark.