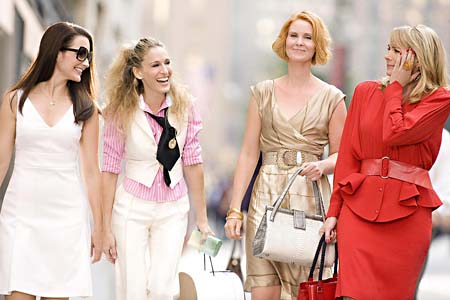 Sex and the City

Surely enough ink has been spilled over whether a women’s picture can own the weekend box office or if Carrie and company can find a crossover audience. Still, it raises the hackles: You can’t really get around the inherent sexism in the speculation, not to mention the sniggering. As a female critic, I’ve never felt the need to turn snide every time some postadolescent suits up in tights to save the world. (Because those movies are made for boys, and this movie’s made for girls. Did I get that right?) I’m not the first to make the comparison that the women of Sex and the City make for a special kind of superhero in American pop-culture iconography. Carrie, Miranda, Charlotte, and Samantha may be larger than life, their pocketbooks and professional highlights a distant fantasy for most of the fan base, but take away the tights, and they’re muddling through just like the rest of us. I don’t think I can overstate the impact of the source HBO show, which has outgrown its initial trend-making for an enduring place in the pantheon. Yes, there was the fun frippery of its parade of couture and close encounters with all kinds of sexual shenanigans (granted, Charlotte taking a compact mirror to get to know her vag marked something of a man-on-the-moon first for mass-entertainment feminism). But the real revolution – especially for a generation of women who woke up to find that they were no longer working with the same expectations or time frames as their mothers before them – was the way that the show recognized, even immortalized, the fact that our friends defy DNA to mark our real family. So then it’s no surprise that, with the first few twinklings of the signature score, this feature-length transposing feels like a happy reunion with a steadfast friend. On sentimentality alone, one might be inclined to give the film a pass, but there’s no need. Longtime creative force King (who wrote and directed) has crafted a feature that stands on its own (typically stilettoed) feet, while holding fast to the series’ singular mix of the giddily ribald and brutally confessional. The film opens with trademark narration from writer Carrie Bradshaw (Parker) that details the goings-on – and turnings-on – of herself and her trio of best gal pals. We pick up several years after the series’ finale, with Carrie on the precipice of cohabitation with her longtime love, the up-and-down-and-back-around-again financier “Big” (Noth, in the ever-divisive role of either the man of Carrie’s dreams or the monkey on her back, depending on who you ask). Her dear hearts have also all settled into domesticity, some more tetchily than others: The prim but lovable Park Avenue princess Charlotte (Davis) has an adopted Chinese toddler with husband Harry (Handler, mostly absent); the famously oversexed Samantha (Cattrall) has moved to L.A. to manage the acting career of her much younger paramour; and lawyer Miranda (Nixon), chafing at the binds of marriage and motherhood and subway commute, is situated squarely on a fault line, primed for fissure. Beyond that, I’m keeping mum. It spoils nothing to say that the women, individually, undergo seismic change, and it goes without saying that any one woman’s triumph or sorrow is felt collectively, and keenly. That, of course, has been Sex and the City’s abiding m.o. through the course of the series and carried quite beautifully into its big-screen translation: that this is a love affair, primarily, between women – women who will turn fearsome should you wrong their friend and then tremble with remorse when they are, quite tragically, the ones who have done the wrong. Inevitably, there are the quiet quibbles: of characters short-shrifted, of a mostly unmemorable soundtrack (save a well-placed Al Green heartbreaker), and of ill-fitting developments (Carrie gets a flat-screen?). Still, in its cinematic incarnation, Sex and the City has lost none of its bawdiness yet gained a more profound sense of soberness. Parker, especially, who in the last season of the show bordered on insufferable in her affected squeaks and shrieks, is allowed to go to very dark places – to be, in fact, quite unfabulous. In the process she returns to earth a mere, aching mortal. I expect nothing less of our superheroes. 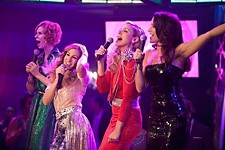 Sex and the City 2
Two years after the end of the last film, Carrie Bradshaw now frets that the "sparkle" has gone out of her marriage. It's gone from this movie, too.