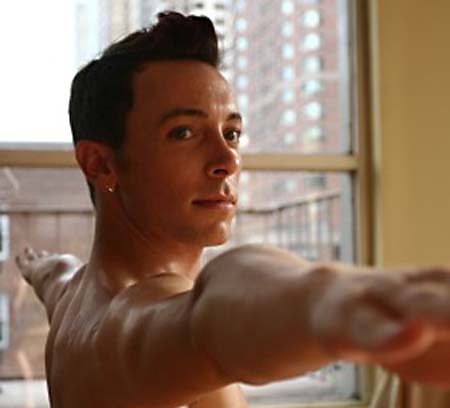 We humans go to the movies with all sorts of different hopes, don’t we? Some of us long to get lost in a world of serendipitous romance, a distraction from the miseries of our otherwise Meg Ryan- or John Cusack-free lives; others look for intellectual stimulation, usually in a foreign language; then there are those who simply want to see people tied to chairs and tortured for two hours. (I imagine a few moviegoers are still holding out hope for that elusive combination of all three – the Nora Ephron/Ingmar Bergman/Eli Roth trifecta!) Well, if your reason for going to the movies is to see naked men, then may I suggest A Four Letter Word, writer/director Andreas’ look at gay culture in New York City, a world where the men – whether while having sex, doing yoga, or balancing their checkbooks – are undressed almost as often as not. At the center of this scantily clad universe resides Luke (Archer, also the film’s co-writer), the sashaying, prancing, quipping embodiment of all things proudly and insouciantly gay and promiscuous in modern American life. A nightly clubgoer and philanderer, Luke’s standards for sexual compatibility are as such: 1) If a man you meet standing in line at a club is available, you go home with him immediately; 2) unless, of course, that man lives on the Upper West Side, in which case he should be summarily mocked and waved away. Geography isn’t just a matter of preference in Luke’s world; it defines your personality. As do your clothes … and your drink of choice … and your penis size. This is the kind of emotional flippancy and casual amorality that prompts Luke’s friends – and one potential true love – to dismiss him as a “gay cliché,” a living, lisping, leather-vest-wearing, casual-sex-indulging, Oscar-Wilde-lite-bon-mot-tossing, ultimately damaging symbol of male homosexuality that squeamish Middle America can always rely on for comfort. It’s a role Luke both loves and hates. On the one hand, his sparkle-covered face and devotion to the religion of promiscuity (“sluttiness is life-affirming”) are his vibrant and defiant calling card in a world drowning in middle-class boredom; on the other, he can sense that all that anonymous sex and flamboyant posturing have become a means to distance himself from his own remembered pain and protect himself from further emotional damage. Tempting the ire of their community, Andreas and Archer dare to peel back the curtain on an immortal stereotype and expose the insecurity that lies behind it and gives it life. Unfortunately, they lose their nerve halfway through and stop short of any real psychological or sociological revelation, contenting themselves instead with the easy trifles of romantic comedy. Which is a shame. The only thing bolder than shocking others is shocking your own.