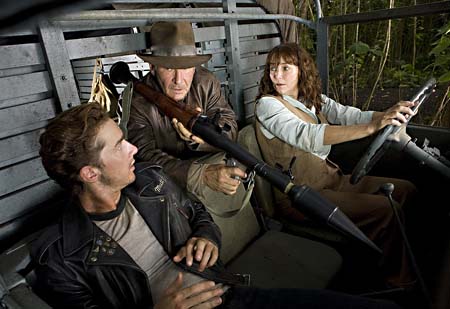 Indiana Jones and the Kingdom of the Crystal Skull

What more do we want from our summer movies, really, than to break the chains that hold us fast to the workaday and liberate us, if only for a little while, from the mundane, anxious, increasingly wild world that lies beyond the exit sign? It's not too much to ask, certainly, and I'm delighted to report that the fourth installment in Steven Spielberg and George Lucas' cliff-hanging archaeological-adventure franchise does just that. Much has changed in both the real world and the reel world in the 27 years since Dr. Indiana Jones (Ford, in fine fettle) first bullwhipped his way into the then fairly recent development of the "summer movie season." (And lest you forget, we have both Spielberg and Bruce the Shark to thank – or revile, depending on the height of your brow: 1975's Jaws was the first "must-see-and-see-again" smash that set the warm-weather moviegoing template for everything from Bruckheimer to Bay since then, almost as if Spielberg had decreed, "You're gonna need a bigger box-office boat.") That said, … Crystal Skull is a fine, rollicking, lightning-paced return to form for all involved, overflowing with outlandishly entertaining action set-pieces that may fall short of eliciting the "holy cow!" monogram-matinee panache of Raiders of the Lost Ark but which still manage more honest, white-knuckle emotion than Rolling Thunder's entire output thus far. Booted from his tenured position as professor of archaeological studies at Yale in a McCarthy-esque twist, Dr. Jones is soon back in the thick of it, teaming up with a Harley-riding Dean/Brando teen rebel named Mutt (LaBeouf) to track down a missing colleague and the crystalline cranium of the title. The Allies have trounced the Nazis in the interim, leaving Indy up against some equally wily Russians led by a black-bobbed, psychic-Commie Cate Blanchett. Nearly as much fun as seeing that battered fedora is the reappearance of Indy's long-ago love and drinking partner, Marion Ravenwood (Allen, who appears positively giddy to be back, and who can blame her?). Beneath all the derring-do and Indy's patented wry understatement ("this can't be good," he notes on more than one occasion, echoing Han Solo's "I've got a bad feeling about this") runs a smart if somewhat overcrowded script by David Koepp, which makes allowances for both Ford and his character's advancing maturity while sacrificing none of the series' innate innocence. Quite a feat, that, considering that before the plot even really begins, we're treated to alien beings, a nuclear explosion in the Nevada badlands, and squirrelly, HUAC-style federal agents with pinkos on the brain. My only real complaints lie with Spielberg's tendency to overburnish his film with a CGI wash. It casts a particularly grating sheen over the first third of the film and makes you pine for the dusty, analog imperfections of the Indiana Jones of yore. But that's a relatively minor quibble for a bedrock adventure yarn that includes swarms of queasily realistic giant Amazonian ants (a nod to the mid-Fifties Charlton Heston potboiler The Naked Jungle) and a vine-swinging sequence that goofily riffs on both Tarzan and Aguirre, Wrath of God. To be sure, nothing can ever replace Raiders in the rarified Valhalla (or El Dorado) of our Saturday afternoon childhoods. But Ford's Indy, who doesn't quite hang up his fedora at film's end, is still the only cinematic smartass-cum-bullwhipping scholar of antiquities I'd want by my side when push comes to shove comes to Nazis ("I hate these guys"), Russkies, or, for that matter, al Qaeda. Go get 'em, Indy, and cue the John Williams while you're at it.