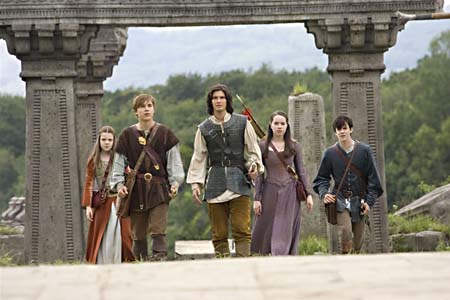 The Chronicles of Narnia: Prince Caspian

When we last left the Pevensie siblings – Peter (Moseley), Susan (Popplewell), Edmund (Keynes), and wee Lucy (Henley) – they'd seen their staid, Blitz-era British lives turned into a literal fairy tale via lion, witch, and a wardrobe that would give Doctor Who's TARDIS a run for its money. That was three years ago for us, but only one year for the Pevensies, who returned to the UK to find that, sadly, although they were able to triumph over evil in Narnia, the Luftwaffe remains impervious to leonine strategies. And as for the residents of that world beyond the wardrobe, a whopping 1,300 years have passed, scant few of them pleasant. This second in the Narnia films opens with screams, accompanied by royal treachery, attempted murder, and the flight of Prince Caspian (Barnes) from his castle keep to the forest beyond. There he meets the dwarf Trumpkin (the always memorable Dinklage) and various of C.S. Lewis' anthropomorphized fauna, the rag-tag remnants of the Narnians who, in the millennia between Wardrobe and Prince, were ethnically – or maybe specieally? – cleansed, with the survivors driven into hiding by the human Telmarines. A blast from Caspian's magic horn, however, literally sucks the Pevensies back into Narnia. In one of the film's few moments of levity, their explosive summoning, in the London Underground, no less, comes seconds after Peter whines about his reduced mythological status in the real world. Uniting with the nascent Narnian insurgency – shades of Pan's Labyrinth's political backdrop – the Pevensies initiate a battle to return the world, or at least Narnia, to its rightful masters. This is a far darker film than its lead-footed if well-intentioned predecessor, rife with battles, death, and bloodshed, all shot through an oppressively miasmatic haze. Aslan (again voiced by Liam Neeson) appears only briefly, although Lewis' Christian motifs and metaphors are writ large enough for a blind layman to see. Aside from the scene-stealing, Eddie Izzard-voiced mouse Reepicheep, there's precious little whimsy on display, and, indeed, all the characters from the first film – excepting the Pevensie lot – are long gone dead. Adamson's pulled a more morally nuanced rabbit (or badger, actually) out of his directorial hat this time out, and the result is a far more engrossing film than its predecessor. 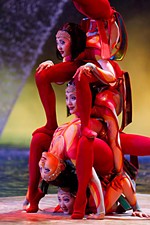 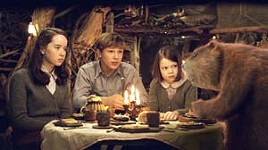 The Chronicles of Narnia: The Lion, the Witch and the Wardrobe
Fusillade No. 1 in Disney's presumed seven-film adaptation of C.S. Lewis' beloved children's tales is marred by dodgy CGI work and windy pacing.