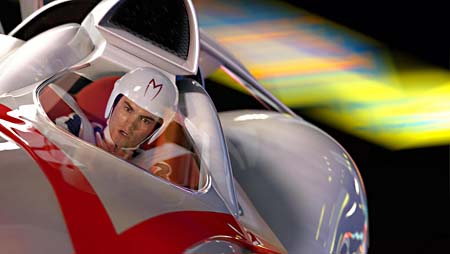 There's more story, heart, and – cutting to the chase, the quick, and the dead – pure, unadulterated fun contained within a scant five minutes of Rockstar Games' new Grand Theft Auto IV video game than there is in the whole of Speed Racer, which raises some very intriguing questions about the future of big-budget Hollywood hot air and the even more grandiosely budgeted gaming industry. Former Matrices the Wachowski brothers populate their shiny, happy, CGI-drenched Hot Wheels world with living, breathing, identifiably organic actors: Into the Wild's Hirsch as Speed, a mountainous Goodman as Pops, Oscar-winner Sarandon as Mrs. Racer, a preposterously perky Ricci as Speed's best gal Trixie, and so on. But in the supersaturated and breathlessly overdesigned unreality of the film, the actors fail to deliver even a quart of real, nonsynthetic empathy. Up against corporate automotive behemoth Royalton Industries, whose snarling bulldog of a CEO (Allam, seen in the Wachowski-scripted and infinitely better V for Vendetta) vows to either buy out Speed's mom-and-pop outfit or wipe the track with the entire Racer clan, Speed smartly opts for the big wipeout. Simultaneously sensing trouble while mourning his missing brother and mentor, Rex (Porter), he breaks familial rank and aligns himself with the masked mystery man Racer X (hint: it's not Death Race 2000's David Carradine) and a cocksure Japanese racer (played by South Korean megawatt superstar Rain). The outcome, of course, is never in question to anyone over the age of 5. The outrageously eye-popping visuals are indeed psychedelic in both flavor and execution (this film owes everything to Japanese animé and Timothy Leary alike), but after 30 minutes of Roy Lichtenstein-on-acid imagery, it's all you can do not to fidget your way out of the theatre and onto ESPN's NASCAR coverage. The Wachowskis' big, unspoken, vaguely transgressive joke is that their Speed Racer experience – I just can't bring myself to call this garish tantrum a "movie" – is akin to nothing so much as diving face-first into a rainbow-hued bowl of methamphetamine-laced cinematic Jell-O. It's a giddy rush for a moment or two, but the comedown is long and harsh, and you'll need one helluva nap afterward. That brings me back to Grand Theft Auto IV, a recent discovery by this writer who up until recently shunned video games for fear of never leaving his living room again. Well, draw the shades, and fuck that noise. Grand Theft Auto IV is the antithesis of Speed Racer, and a vastly superior entertainment in every way, medium be damned. It's a nuanced, masterfully written, and lovingly – but realistically – designed piece of pop-cultural American art masquerading as an obsessive time-killer. The sad irony of Speed Racer vs. GTA IV is that Rockstar's game places digitally created, inorganic characters into an instantly recognizable environment suffused in every pixel with honest-to-goodness storytelling – and then proceeds to make you care about them to the point of tears. The Wachowskis' hyperbolic, tangerine-flavored, metal-flake freakout, on the other hand, has plenty of flesh-and-blood performers milling about, strenuously attempting to advance Speed Racer's minimal plot, but nary an honest emotion in sight. Speed Racer: Color him go, go, gone. (And that goes double for Chim Chim.)