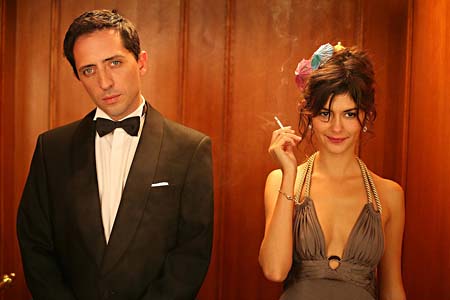 Infinitely superior to its forthcoming American remake (which, to be honest, has yet to be announced but is nevertheless as certain as Carla Bruni's upwardly mobile tendencies), Priceless is a supremely satisfying confection – a French romantic comedy of the sort that ends with you standing outside the theatre with a dopey grin on your face. And how could it be otherwise, with Amélie's Tautou at her most lash-battingly doe-eyed, and whippet-thin Moroccan comic Elmaleh as sweet and refreshing as a summer breeze blowing in off the French Riviera? Salvadori (Après Vous) knows his way around the French sex comedy, to be sure, but this is something else altogether, at once lighter and denser, a soufflé de l'amour whose closest American equivalent – tonally, at least – is Dirty Rotten Scoundrels by way of Lubitsch. Tautou plays Irene, a gold-digging gamine on the make in Biarritz. On her less than joyeux anniversaire, her current meal-ticket (Dobtcheff of Before Sunset) is sloshed to the point of unconsciousness in their suite. She wanders into the hotel bar and mistakes Elmaleh's Jean, a minor hotel employee, for a wealthy guest and potentially better (i.e. younger) sugar daddy. Alas, their night of improbable passion is discovered and she's off to Nice with the by-now utterly smitten Jean in both hot pursuit and increasingly dire financial straits. Until, that is, he's mistaken for a gigolo by wealthy widower Madeleine (Adam) and embarks upon his own l'age d'or, with helpful tips from an increasingly affectionate Irene. Kept apart by their need to milk their paying companions (and pay they do: Jean nets an EU$35,000 Jaeger LeCoultre wristwatch in record time), they are so obviously fated to be together that the end result of the narrative is never in doubt. But as Olympic Airways once noted, getting there is half the fun, and the perfectly cast Tautou and Elmaleh are so ingratiating, so eager to let their guards down and experience the real meaning of joie de vivre, that what by all rights should be little more than a frothy screenful of screwball comedy clichés ends up transcending its own innate limitations and becomes, in the end, a booster shot for the lovesick. Drunk on haute couture as well as oh l'amour, Priceless is like Breakfast at Tiffany's bereft of both Capote's cynical élan and Blake Edwards' overwrought (and overvalued) New Yorky façade. Like true Champagne, it fizzes but never fizzles, leaving you pie-eyed and tipsy on the limitless possibilities of romance there, here, and everywhere. 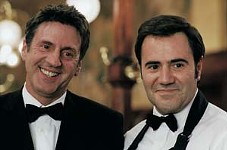 Après Vous
Two of France's top actors pair up for this wishful farce about good deeds and their consequences.