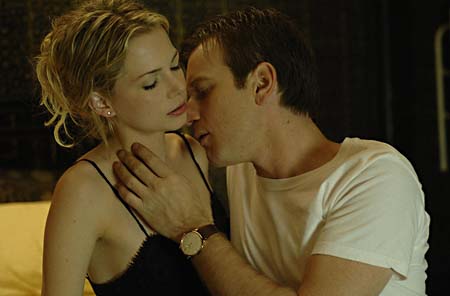 Like so many sausages, Hollywood continues to grind out thriller after thriller, rehashing implausible twists and half-baked explanations without shame. Occasionally, the genre will produce something smart and provocative, like last year’s Michael Clayton, but generally these movies are all the same, an indigestible concoction of ingredients thrown together without the benefit of any serious consideration of logic. Take, for example, Deception, a so-called erotic thriller in which a dweebish accountant (McGregor) stumbles upon a sex club of successful New York professionals, after mistakenly coming into possession of the cell phone of a handsome and charismatic attorney (Jackman) who has befriended him. But has he really “stumbled” upon this group of hot-to-trot Manhattanites? Was the phone swap really “mistaken”? Why do people seem to fail to recognize his “lawyer” pal? And what the hell kind of accent is McGregor using in this movie? Is he playing a Midwesterner by way of Scotland? The lies in Deception unfold in a manner which assumes that the revealed truth will surprise you, but only a numbskull would be misled by the fishy turn of events that not-so-subtly telegraph, "There is more here than meets the eye." First-time film director Langenegger has no idea how to compensate for the screenplay’s shortcomings; despite his background in television commercials, he has difficulty selling even the film’s more accessible elements, like the sexual escapades of the upwardly mobile. While the accent-disabled McGregor at least has some idea of how to play his stock role, Jackman communicates the sociopathic tendencies of his bad-boy character by simply tautening his facial muscles, an acting trick that is much more effective when he's been in full lupine make-up in other movies. As the woman caught in the middle, Williams appears lost and foggy-headed, hardly the stuff of which femmes fatales are made. As written and performed, her character is not much more than a prop. Like most contemporary thrillers, Deception digs itself into a hole that gets deeper and deeper as it goes along. If you’re to accept the dumbfounding finale of this film, which plays out in – of all places – a municipal park in Madrid, American passports can be issued on a day’s notice and handguns can be easily transported on trans-Atlantic flights, notwithstanding 9/11. Whether you view it as intellectually dishonest or just plain sloppy, Deception is a movie that more than lives up to its title.