The main problem with controversial gross-out comedies is that it doesn’t take long after one taboo has been scratched off the list for the next one to appear on the horizon. Just ask the producers of American Pie or There’s Something About Mary: Today’s shock cinema quickly becomes tomorrow’s in-flight entertainment, which makes the success of Harold & Kumar Escape From Guantanamo Bay so impressive. Sequels to lowbrow cult-stoner-bathroom-sex comedies aren’t supposed to work; they’re supposed to be dry, lifeless retreads straining to shock. Guantanamo Bay, however, breaks the mold, following in the outlandish footsteps of Harold & Kumar Go to White Castle while expanding on its predecessor’s mandate to push the boundaries of racial insensitivity. Once again the lion’s share of the credit for this goes to Penn as Kumar, who is pure, unfiltered, unapologetic id: Come rain, come shine, come political internment, Kumar never stops seeing the world as his own private pleasure dome. Unfortunately for the more straightlaced Harold (a wonderfully deadpan Cho), his friend’s devotion to self-indulgence often leaves them both in a lurch, as it does when Kumar brings a homemade bong on their flight to Amsterdam. A little post-9/11 paranoia and a lot of racial confusion later, and Harold and Kumar are on the run from the now-infamous military prison and setting off on a road trip across the American South to prove their innocence. Along the way, they run into a whole cavalcade of American racial stereotypes, and none of them – not the whites in the KKK, not the blacks playing ghetto basketball, not the Jews coveting a bag full of coins – is safe from mockery. But what truly elevates Guantanamo Bay out of the realm of a typical brainless, harmless stoner comedy is that it saves its most stinging comic attacks for the ultrapatriotic, post-9/11, willfully ignorant American male, personified by federal law-enforcement agent Ron Fox (Corddry). Fox is the portrait of modern-day, topsy-turvy neoconservative logic: Like his heroes in the Bush administration, he’s willing to destroy America in order to save it (in one interrogation scene, he literally wipes himself with the Constitution). In other words, he’s the perfect foil for our heroes, who defuse geopolitical anxiety with post-racial, apolitical lust fulfillment. It’s the triumph of instinct over ideology, and it’s not a little bit brave. Anyone can come up with jokes about incestuous rednecks or pubic hair that “looks like Osama bin Laden’s beard,” but it takes guts to make a comedy in which the Indian-American hero accuses an African-American TSA agent of racial profiling, all so he won’t get caught smuggling weed onto a plane. 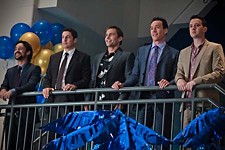