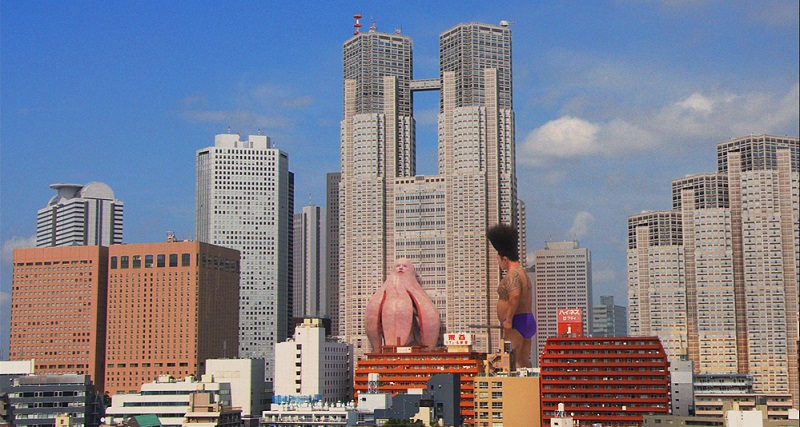 Midnight madness doesn't begin to describe this strange Japanese import. A popular favorite at numerous festivals (including last year's Fantastic Fest in Austin), the film is a modern superhero story that combines elements from Japanese monster movies, mockumentaries, comedies, and downright demented CGI fantasies. Matsumoto, a huge TV celebrity in Japan, directs, co-writes, and stars in the movie as Dai Sato, a nondescript, downbeat, middle-aged man, who in the opening scenes has an offscreen camera crew inexplicably following him around and asking him questions. It's hard to imagine anyone being interested in this lug, much less a camera crew. Like other workaday salarymen in Japan, he complains about not being paid enough, and his modest digs are proof of that statement. He's separated from his wife and sees his daughter rarely. He's employed by the Ministry of Defense and he's always on call. But until we see what he actually does, the viewer is mystified by what the videographers see in Sato. Then he gets the call, and races off to the nearest electrical power station and, after electrodes are attached to his body, he transforms into the giant superhero Big Man Japan, who wears nothing but purple underpants and a Don King-style haircut. The baddies he faces are bizarre inventions that seem like they're somebody's hallucinogenic outpourings on bad drugs: There's an evil-eye monster that is essentially a walking eyeball and a strangling monster with a bad comb-over that can uproot buildings by encircling them with his expandable arms. As always in Japanese monster movies, the populace accepts the existence of these unearthly creatures as part of the normal fabric of life, although they are beginning to tire of Big Man Japan, whom they accuse of causing a nuisance and losing his edge. Even his agent (Ua) is frustrated with him and implores him to wear advertising on his body to pay the rent. Even though the film has many very funny moments (the sight of the big purple underpants pinned wall-to-wall for Sato's transformation into Big Man Japan and the wacky closing credits, for example), Matsumoto generally plays the film straight – all the better to sustain the illusion created by this strange blend of documentary realism and pure fantasy. The effects are reasonably well-created, though hardly transparent. The last 15 minutes of the film spins out into unimaginable realms. Fans of this kind of stuff will leave smitten; those accompanying them to the theatre will have a pretty good time too. (See "'Big' in Japan, but What About Austin?" in April 25's Screens section.)

Big in Japan, but What About Austin?
The Alamo Drafthouse test-markets a Japanese oddity 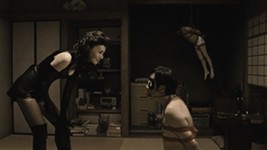 R100
Drafthouse Films is distributing this Japanese S&M mindwarp. You could do far worse for midnight-date movie fare.