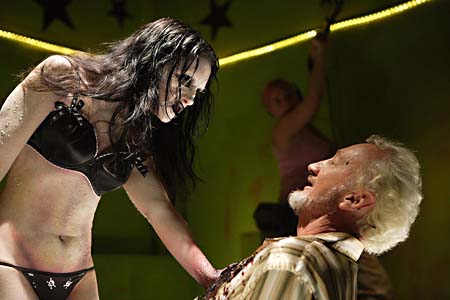 The filmmakers score an A+ for the title, a pop-culture mash-up guaranteed to tantalize and evoke a knowing laugh. It’s reflective of the movie’s tongue-in-cheek tone, which takes neither zombies nor strippers too seriously but exploits their commercial possibilities to the max. Appearing nationwide in about 400 theatres one week before its release to DVD, Zombie Strippers has two big assets going for it, apart from its amusing title: the casting of horror vet Englund (Freddy Krueger, in the flesh) as the proprietor of Rhino’s, the underground strip club where most of the action takes place, and porn star Jameson (also in the flesh) as Rhino’s star attraction. Writer-director Lee’s story has some conspiratorial aspects, kicking off as it does in the fourth term of George W. Bush’s presidency. A flattering perspective might see this film double-billed with another movie in current release, Stop-Loss: Like that film, Zombie Strippers is set into motion by the government’s need to replenish the number of troops sent to Iraq, but instead of a stop-loss policy, government scientists here devise a chemo virus that reanimates dead soldiers, a plan which, like so many government plans, goes awry. A zombie escapes containment and hurtles into the dark abyss of Rhino’s in Sartre, Neb., a club where everything has an absurdist/existentialist tinge, including the name of its owner, Ian Essko (Englund). Jameson’s Kat is the first stripper to turn zombie, but the irony is that the transformation only increases her allure and the club’s business. Since the other strippers want to be like Kat (and I guess that’s where the film sees itself as an echo of Rhinoceros, Ionesco’s famed play about conformity), they all turn zombie and start making money hand over tit. In addition to lots of zombie chomping, the film has lots of stripping action and can also boast the appearance of Ultimate Fighting figure Tito Ortiz. The action can be bloody, but is mostly routine. Ultimately, the film’s most eye-catching special effects are reserved for bikini waxes and implants. 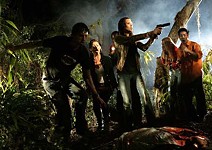 Hatchet
The terrifically retro maniac in this horror film recalls the heyday of Eighties gore films with gleeful abandon. 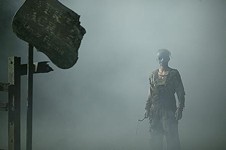 Behind the Mask: The Rise of Leslie Vernon
A wickedly entertaining postmodern take on the hallowed, Eighties-era slasher flicks.