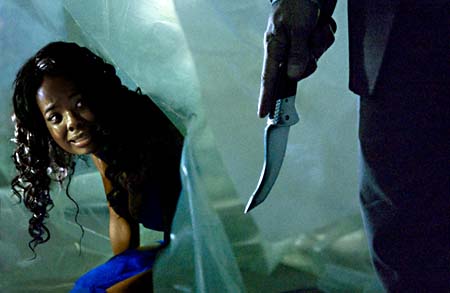 Are there so few cinematic fish flopping around the bottom of the "To Be Remade in Case of Emergency" barrel that we've already dipped below the chum level of subpar Eighties horror and are now reiterating films no one wanted to have much to do with in the first place? Obviously, we have. Then again, McCormick's new version is a remake in name only – it chucks virtually all of the storyline from Paul Lynch's 1980 original, including the two aspects that make that film watchable (but only just): Jamie Lee Curtis and a disco score so grating that it marks the film as dated. This do-over isn't so much an improvement over the original as lousy in a whole new direction, a nearly bloodless slasher film with fewer surprises than a broken jack-in-the-box. It's blandly scripted by J.S. Cardone, who adds nothing new to a genre that has already expired and been resurrected more times than Jason Voorhees (via Wes Craven and Rob Zombie, among others). Hairspray's Snow plays high school senior Donna, whose entire family was gutted three years earlier by maniac teacher Richard Fenton (Schaech), who has since been locked away, presumably, in the same inescapable madhouse Michael Myers keeps escaping from. Now, with the big night at hand, Donna, dull beau Bobby (Porter), and a quartet of their BFFs are stalked and ceremoniously exsanguinated (offscreen, no less), with nary a shred of suspense or even mild annoyance as the still-statutory crush'n prof carves a virtually goreless path toward his favorite coed while a pair of none-too-quick cops (28 Weeks Later's Elba, The Wire's Ransone) do absolutely nothing out of the ordinary. Go stag to the video store, rent the original, and at least you'll get a warm fuzzy from watching Curtis and company boogying down to the theme song. Prom Night: Everything is so not all right. The Stepfather
Watch out for those "family values" guys who sweep Mom off her feet and move into your house. They may not be who they seem.