In the late Eighties and early Nineties, you couldn’t walk into a multiplex without tripping over a movie based on one of Daniel Waters’ scripts. Following the cult success of his black comedy Heathers in 1989, the guy was everywhere, and every year saw yet another one of his films released … and each somehow worse than the one before it. The Adventures of Ford Fairlane (1990), Hudson Hawk (1991), Demolition Man (1993): Thomas Paine had it wrong; those were the times that tried men’s souls. So 15 years pass, and, save for a straight-to-DVD directorial debut, Happy Campers, in 2001 and a bit of anonymous script-doctoring (how bad, by the way, did those scripts have to be for their producers to call Waters in to doctor them?), all has been mercifully quiet from the Waters camp. If only it had remained that way, because the filmmaker’s return, Sex and Death 101, which screened during Fantastic Fest, is a self-indulgent, snarky, scattershot mess through and through, from its opening shots of suave fast-food restaurateur Roderick Blank (Baker) wandering the streets clad in a smirk and an open-collared dress shirt, bragging about his ability to drive women to distraction, to its climax, which features a humbled Blank’s run-in with the mysterious Death Nell (Ryder), a sexual vigilante stalking predatorial, misogynistic, and just plain boorish men with some sort of coma-inducing anti-fairy dust. In between, all manner of nonsense occurs. First, Blank receives an anonymous e-mail listing not only the 29 women he’s slept with up until that point but the 72 others he’s going to sleep with before he dies. Then he discovers that the list originated from something called “the oracle,” which, like the brain behind The Matrix, is some kind of machine in an all-white room kept watch over by a cryptic middle-aged man in a three-piece suit and which, like the brain behind The Matrix, made no sense to me whatsoever. I would say it’s an update on the chattering galaxies in It’s a Wonderful Life – an all-seeing benevolent power with a black sense of humor trumpeting the value of deep relationships over shallow self-involvement – but whereas Frank Capra had the gall to drop George Bailey down a hole of meaninglessness and leave him there to claw his own way out, all Waters can muster is a series of predictable and clumsy scenes stolen from far more clever sex farces like The Wedding Crashers and Flirting With Disaster (mislaid erections and homoerotic mishaps win the day here) that leave the caddish Blank lightly humbled but ultimately unscathed, and surely unredeemed. In other words, it’s the perfect role for Baker, a living, breathing haircut passing for an actor whom you’ll probably recognize from half a dozen movies you won’t remember the names of. Heaven help a writer who turns a philanderer into a blank. 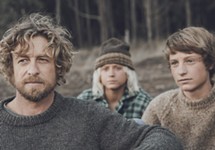 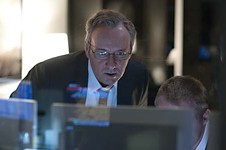