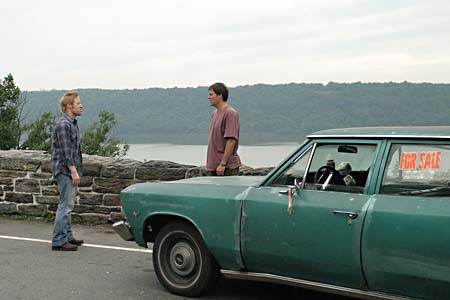 Backseat begins with a crosscut between two pals in compromising positions: While struggling actor Colton (Alexander, who also scripted) has to drop his pants for a casting call, nice guy Ben (Bogue) finds an amorous afternoon with his girlfriend, Shelle (Dollar), derailed when her role-playing fantasies include the repeated directive, "Rape me!" It's a punchy opening, one that sets up the viewer for a far sharper, more subversive picture than Backseat proves to be. Almost immediately, Colton and Ben leave the city for a weekend roadtrip to Montreal. The intention is to arrive at a restaurant frequented by the actor Donald Sutherland, of whom Colton is a big fan; Colton's secondary, secret goal is to unload a bag of cocaine on the other side of the border. The film, which earned the Audience Award at the Austin Film Festival, has some funny moments: a Mexican standoff in which the film hits a loosey-goosey high and Janowitz's tertiary character Frankie, who communicates only through text messaging and twitchiness. His is the most sympathetic character of the lot, but then, that's no great shakes when the competition comes from feckless Ben, mean and dumb Colton, and a grab bag of kooky characters that feels like Lesser Hits From the Indie Film Playbook, Vol. 3 (see "conspiracy theorist" and "stripper who inexplicably wants the paying customer to paw her"). Alexander's script considers context anathema, leaving us to wonder, among other puzzlers, why these two jerks are friends to begin with – and, perhaps, on what bad breakup or neglected childhood one may blame the film's dispiriting misanthropy. (Josh Alexander and others will attend the 7:30pm screening on Friday for a Q&A.)