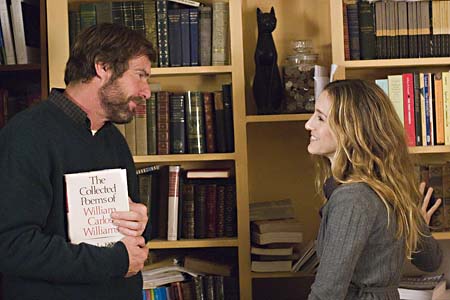 "I never tire of Bleak House," says Lawrence Wetherhold (Quaid), a widowed professor of Victorian literature at Carnegie Mellon University, who reveals no trace of ironic self-awareness in his statement. He's the central "smart person" in this comic drama, a guy who would be able to spell "dysfunctional" with ease but never recognize the word as a description of himself and his family. Lawrence is acerbic and demanding yet wholly disinterested in his students, family, and career. He's heartless and condescending to his students, whose names he refuses to learn, and remote and unobservant toward his two nearly grown children, Vanessa (Page), a high-school senior whose character traits are even worse than her old man's, and James (Holmes), who lives in the college dorms, probably in an attempt to get away from the family dysfunction. It's unclear how long ago it was that Lawrence's wife died; it's clear, however, that he still grieves for the person who must have lent some humanity to this family and that "know-it-all" Vanessa fills in as a surrogate housewife when she's not acing the SATs and volunteering for the Young Republicans (an off-key note in an indie movie about "smart people"). Vanessa is the one who came up with the off-putting title for Lawrence's new book: You Can't Read. The film, which premiered at Sundance, is the first feature effort for commercials director Murro and novelist-turned-screenwriter Mark Jude Poirier, who make a distinctive, if not entirely successful debut. Poirier's language is often delicious, highlighted by barbs and dialogue that are as well-aimed as they are socially inappropriate, and Murro evidences none of the ADD flash that often makes commercials directors ill-equipped to handle character arcs. Yet there's something amiss in Smart People that fails to get a fire going among any of the characters. At the start of the movie, Lawrence's ne'er-do-well brother, Chuck (Church), shows up with the hope of couch-surfing for a while. The dissolute ways of the brother (whom Lawrence is always quick to introduce as his "adopted" brother) are set up as a foil for the tight-assed Vanessa, whom Chuck labels a "monster." The pairing is schematic and never gets a realistic dynamic going. Parker is cast in the thankless role of the love interest, an ER doctor who patches up Lawrence after a fall and remembers him as her former teacher. The reasons why this accomplished woman might revive her schoolgirl crush and become involved with this nightmare boyfriend strain credulity. It's hard to imagine Lawrence working up a passion for anything – even sex. The performances are all good, but only Church is fully believable. No amount of beard, paunch, slouch, and sarcasm can disguise Quaid's innate likableness as an actor. Page (Juno) is truly one of the great acting discoveries of recent years, but, God bless her, she's already too old to pass for a high school senior. Another acting great, Christine Lahti, also appears in a minuscule, nonessential role, and it makes one wonder if there was a scrapped subplot or something else askew. There's much more roiling beneath the surface of these characters, and it's a shame we don't come to understand them better. Smart people, dumb choices: It's true for both the characters and the filmmakers. 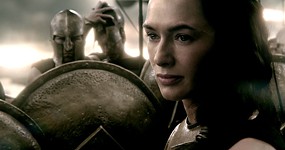 300: Rise of an Empire
Better than the first movie, this sequel is a more deserving Aegean “epic.”