Not reviewed at press time. The latest Bollywood import is a comedy of mistaken identities. 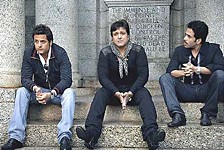 Life Partner
This new Bollywood film is a comedy about different views of marriage. Golmaal Returns
In this Bollywood comedy sequel, a housewife's suspicions about her husband's infidelity lead to a preposterous cover-up.