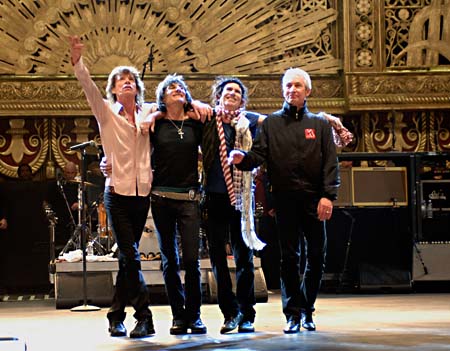 Long after Jean-Luc Godard (One Plus One/Sympathy for the Devil) and Albert Maysles (Gimme Shelter), one of the great American neorealists of the 1970s, Hal Ashby, took his shot at the Rolling Stones in Let’s Spend the Night Together, a concert film from the group’s 1981 U.S. tour. With the infamous UK outfit’s front line pushing 40 and its rhythm section older, the media pulled the "Last Time” angle, then shrugged off Ashby’s stadium aftermath. The previous decade’s theatrical parallel, Ladies and Gentleman, the Rolling Stones, a peak-era 1972 arena show in Fort Worth, also played to yawns. Martin Scorsese’s Shine a Light will prompt myriad reactions – shock, awe, glee – but dismissal will be in the minority. Shock comes courtesy of the frontline’s Grand Canyon character lines, disbelief from the soon-to-be 65-year-old frontman’s sheer physical specimen, and roller-coaster thrills via a 17-song set that starts with “Jumping Jack Flash” and concludes on “(I Can’t Get No) Satisfaction.” Like his late street-wise peer Ashby, “Marty” opens backstage, cuts in primo archival footage of the band – hilariously so with the 1966 in-drag video for “Have You Seen Your Mother, Baby?” – then lets a full concert leave its brand. Now well into their 60s, Mick Jagger, Keith Richards, and Charlie Watts still emit that which has beckoned generations of filmmaking fanatics, so Scorsese uses New York’s intimate Beacon Theatre to get into everyone’s craggy face except Charlie Is My Darling Watts, whose “Sympathy for the Devil” never creased his impassivity. And yet, when Jagger sidles up to Richards for nose-to-nose harmonies on their beloved country original “Far Away Eyes,” rock & roll’s self-proclaimed Glimmer Twins engender the same trademark chemistry as the young outlaws in Cocksucker Blues, more cinematic Stones bare-all. Close up, the guitarist’s mascara-burned brown eyes reveal Richards as both teddy bear and Bengal tiger. (Five will get you 10 that’s documentarian emeritus Maysles, credited with “handheld camera,” crouching behind Keef for a kick-drum view of Watts’ beats per minute.) Grinding on both Jagger and “Live With Me,” Christina Aguilera reflects the marquee’s legend not by the heart so obviously in her throat but through the determination lining her brow. Scorsese, cameraman on Woodstock and The Last Waltz’s Band leader, shoots up into Jagger’s dental hardware almost to the exclusion of everything else, but the singer’s gritty “Some Girls,” Richards and Ronnie Wood’s steel-string serenade “You Got the Silver,” and Mr. Buddy Guy staring down “Champagne and Reefer” forgive all. As with 1992’s Rolling Stones Live at the MAX, upsizing Shine a Light for IMAX screens (it also plays in conventional theatres) transforms concert film into concert. The film dedicated to Atlantic Records fountainhead Ahmet Ertegun, whose complications from injuries sustained in a tumble backstage at the Beacon resulted in his death, let the record show that a lifetime of musical innovation concluded with dying not at but from a Rolling Stones concert. 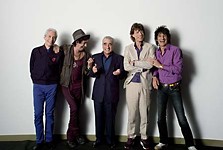