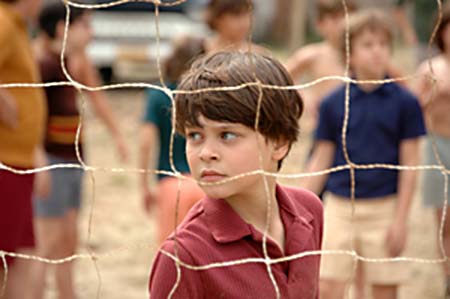 The Year My Parents Went on Vacation

This Brazilian film is set in São Paulo against the twinned, opposing backdrops of the explosive 1970 World Cup and, to a lesser but no less important extent, the brutal military dictatorship that defined not only the politics of the day but also the most mundane aspects of daily life. The Year My Parents Went on Vacation is a curiously unaffecting amalgam of the archetypal coming-of-age tale, here twinned to "outsider" religious overtones (in this case São Paulo's Orthodox Jewish community) and a small but deadly dose of uneasy political melodrama. Younger audiences' knowledge of Brazil 1970 may be limited to vague memories of some footballer name Pelé. But then Hamburger isn't seeking to educate the yanquis any more than he's giving us a crash course in childhood-abandonment issues; Brazil's ever-present, ever-populous Jewry; or the fine line between innocence and soccer as metaphor for the sublimely unreal realpolitik of 1970 – both in Brazil and wherever two kids might kick a leaky futebol around a pitted and dusty patch of pitch. When his parents are forced to flee the city as subversives, exiting beneath the doublespeak of "going on vacation" (subbing for extermination), 12-year-old Mauro (Joelsas) is unceremoniously packed off to stay the duration with his Orthodox Jewish grandfather – who, much to everyone's dismay, has died the day before. Mauro's initial bored bewilderment – he spends the first day of his new life dribbling up and down a dingy apartment hallway – is met and matched by his late grandfather's neighbor Shlomo (Haiut), an unsmiling, stoic rabbi's assistant at the local synagogue. Joelsas and Haiut make the initial wariness between bearded, elderly Jew and tow-headed, homesick soccer kid unfathomably real, and it's this interplay between the two characters that fuels the film's very large heart. Think Lies My Father Told Me meets Costa-Gavras by way of Lasse Hallström, and you're getting warm. Still, despite young Mauro's sexual awakening (of course), his status as a goy within his adoptive family (no bris!), and the persistent question of whether his parents are, indeed, ever going to return, this Year is oddly staid, emotionally. It touches your heart at a distance, and while you may recognize the tickle, you come out of the theatre wishing for more than just a spray-painted "Libertad!" on a wall or a battered soccer ball filling in for blood, kin, or both.