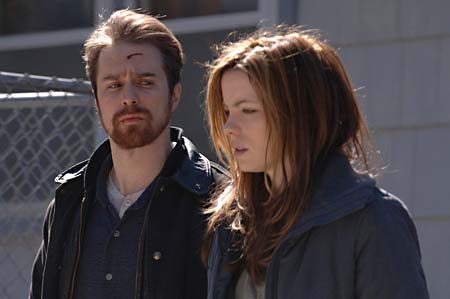 Midway through writer/director Green’s adaptation of Stewart O’Nan’s debut novel, high school freshman Arthur Parkinson (Angarano) – floppy-haired and affable, trombonist in the school marching band, the type of boy beloved by girls who wear horn-rimmed glasses and study photography – takes his father (Dunne) to task for leaving his mother one minute and then begging to be allowed back into her life the next. Why, he demands – with all the moral implacability of youth – can’t he just pick one emotional position and stick with it? It’s a perfectly valid question, of course, but one that will probably ring hollow in the ears of anyone over the age of 18. “Sometimes,” the old man responds for all of us, “we do things we can’t explain.” Amen to that. And amen to Green (George Washington, All the Real Girls) for letting that adage guide him through O’Nan’s story of imperfect humanity lashing out blindly against bitter circumstance, because it gives his stars – particularly the brilliantly off-kilter Rockwell as Glenn Marchand and Beckinsale as his estranged wife, Annie – the freedom to sound the depths of their characters without drowning in typical actors’ concerns about motivation and meaning. Call it Method Acting in a Universe Without Method. The Parkinsons and the Marchands live in a small, snow-covered town in Pennsylvania, a static world of nursed grudges and blown opportunities, long histories and emotional paralysis: A world in which everyone knows everyone else and everyone, it seems, is one small step away from total collapse. In such a close-knit community, where ties and memory run deep, a collapse for one means catastrophe for all. Which is where Snow Angels runs into trouble. Few filmmakers these days are as capable and assured with the fumbling ambivalence of human conversation as Green is; his ear for the half-truths, misapprehensions, and long-simmering defensiveness of everyday dialogue is a wonder to behold. But when those conversations turn into actions – when those thousand perceived slights and remembered dissatisfactions explode into physical confrontation – his Snow Angels slips, if only for a few minutes here and there, into melodrama and cliché, marring an otherwise singular experience. Hopefully, one of these days, Green will be bold enough to make a movie where nothing happens, where conversation is both his means and his end. I say give him the sequel to My Dinner With Andre, and see what he can do. I, for one, bet he could work miracles around a brunch table. (See "His Dark Materials," for an interview with Green.)