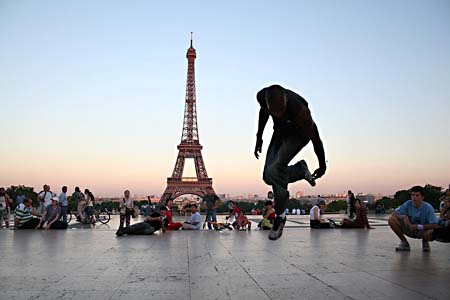 If, like me, your mad skillz on the dance floor are limited to the (very) occasional footwork foul-up and rock (un-)steady exercise in abject Caucasionality, coerced entirely by DJ Mel's (very real) mad skillz on the decks, then Planet B-Boy will almost certainly make you want to take a Shindaiwa chain saw to your foolish ankles and be done with it once and for all. Better to have a suckass tag like "Stumpy" or "Footloosed" than to bear the shame of being unable to funkify anything other than your torso at any given moment. My tachycardial echodeck still hits the beat every time on the rhyme, to be sure, but my bass-def appendages were stolen off a golem and unwrit (emet to met, flesh to clay, unwound, Technic zero, hip-hop Harvey style). It's cool: I was in in New York 1980-84, and I saw MTV double-team Rapture up on CBGB's hardcore gunners Kraut's All Twisted, and it was wicked. Still, the urge to spin cranial 360s – as opposed to the Zorlac type – runs deep, and not just for Jamie Kennedy and your dad. As Lee's far-flung doc Planet B-Boy makes abundantly clear, breakdancing long ago went competitively global. Today, American crews have to battle alongside international rivals such as Japan's Angel Dust Breakers, French-based the Family (whose youngest associate, Lil Kev, looks to be all of 10 years old), and South Korea's legendary Last for One. What they all have in common, as Quik, a member of Japan's Ichigeki Crew, explains, is a passion for the border-busting power dance, movement as a movement, freedom of expression, wild-style: "After I started breakdancing, I became more aware of my identity and open to other ways of thinking." This from a post-teen, premillennial product of perpetually regimental Japanese society. Quik speaks worlds verbally, choreographically, and culturally. Which, nicely dovetailing, is what Planet B-Boy does as well, without getting bogged down in the South Bronx. It turns out globalization has its good points after all, and they're sporting Chucks, Kangols, and post-Gomi DIY gear. Spin again. 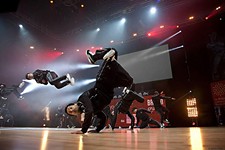 Battle of the Year
In this dance competish, it's U.S.A. all the way.