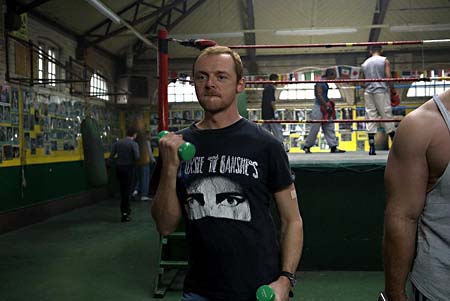 Anyone hoping for the lean meat of the fast, furious, and riotously funny Shaun of the Dead or even the popcorn fancy of the lesser Hot Fuzz – both of which share with Fatboy the co-writer and star Simon Pegg – will do best to look elsewhere; this British rom com is all soft and plodgy, a by-the-numbers redemption tale that careens uncomfortably from sentimentality to stomach-turning sight gags, as in an extended and excruciating blister-popping scene. Blister is attached to the foot of said Fatboy, Dennis (Pegg). After another kind of podiatric mishap (cold feet, pregnant fiancée, groom hightailing it away from the altar), Dennis spends the next five years getting fatter, while his lost lady love, Libby (Newton), gets even fitter; by the time Dennis realizes he made a big mistake, Libby's already attached to an American suit named Whit (Azaria), who, in addition to being the perfect boyfriend and an able provider for Libby and her son, is also an impassioned marathon runner. In one of those it's-so-crazy-it-might-work … in-a-movie moves, Dennis decides to train for a London marathon, the idea being that, at the slightest demonstration of follow-through in Dennis, Libby will come running back to the man who ran away five years prior. There are bits here and there that are genuinely funny (security guard Dennis dry-humping a lingerie-store mannequin doesn't make the cut, not by a long shot), and there are certainly worse crimes in romantic comedy than forgettableness. But what I can't abide – along with, I suspect, countless other fans of Pegg's collaborations with Edgar Wright and Nick Frost – is how utterly unlikable Pegg is rendered here. Let's not be stingy with blame – there's enough to pass around among first-time big-screen director Schwimmer (Friends), original scripter Michael Ian Black (The State), and Pegg (who did the last pass and "Britishized" the screenplay, which was originally envisioned as American-set and -acted). Not an unimpressive gathering of talent, but their forces combine to produce a leading man who starts out a shit and upgrades only to a sad sack of desperation, poor sportsmanship, and projectile pus. The Board of Underappreciated Bodily Fluids in Film rejoices. The rest of us, not so much. 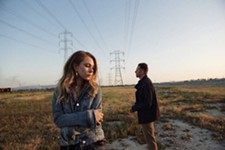 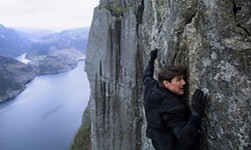