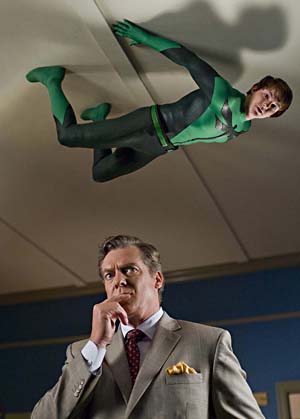 Superhero Movie brings to mind a lot of questions. Why wasn't this green-lit and out in theatres a month after Sam Raimi's Spider-Man? Did all the fart jokes exist in director-writer Mazin's original script, or were they forced on him by certain producers who, having several Scary Movies and SNL film credits on their résumés (I'm talking to you, Robert K. Weiss), know the true box-office value of crap? Did anyone other than me see Mazin's feature debut, The Specials? That superhero satire, which had the lousy release timing to head more or less straight to video less than a year after Kinka Usher's thematically similar Mystery Men, is a semismart, affectionate wink-and-nod toward the whole concept of superheroes and what, if anything, they did on their days off. After Brad Bird's untoppable The Incredibles, this vein of humorous pathos has been bled dry, but it's worth bearing in mind that Mazin tackled superheroics (working from a script by James Gunn, no less), with a degree of affection, right out of the gate. That said, Superhero Movie blows harder than Storm from X-Men. It's a tonally confused comedy, which, for once, doesn't go far enough comedically. Featuring an earnest performance from Bell – whose riff on Peter Parker/Spider-Man is very nearly note-perfect – and an appropriately scenery-devouring McDonald (voice of The Iron Giant's G-man, Kent Mansley) as the supervillain Hourglass, Superhero Movie plays like a real (albeit really cheap) Marvel Universe knockoff that was shanghaied by the Wayans gang and then minimalized by Reducto from Harvey Birdman, Attorney at Law. Even cameos from Airplane!-er Robert Hays and Forbidden Planeteer-cum-comedy-stalwart Nielson can't supersize the yuks on what turns out to be a mere annoyance of a spoof. Bah, puny insect! 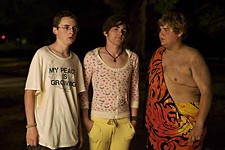 College
New frat-house comedy is timed for the new semester.