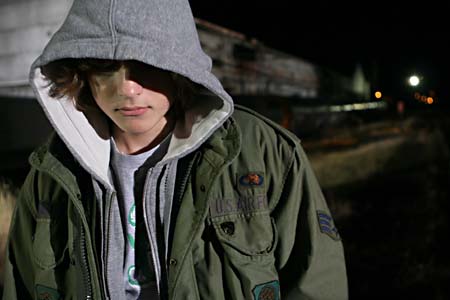 "I just feel like there's something outside of normal life," says teen skateboarder Alex (Nevins), the troubled protagonist of Van Sant's new melancholy masterpiece. "Something besides teachers, breakups, girlfriends. Like different levels. Right out there." That teenage self-awareness, the exact moment when you feel as though you were caught like a bug on some sort of social flypaper, with all eyes on you (including your own) as you struggle to free yourself and break on through to the other side of adolescence – adulthood – is what both the director and the character of Alex (played without a ripple of falsehood by Nevins) are after, although only one of them knows it. Because it inhabits the young, (almost exclusively) male skateboarding subculture, Paranoid Park will inevitably be compared to Larry Clark's sk8r triptych (Kids, Ken Park, Wassup Rockers), but Van Sant's film blows them all out of the empty swimming pool with the quiet clatter of skate wheels on cement, the metallic clank-and-squeal of an Oregon Pacific railroad train, and violent, accidental death. Unlike Clark's almost-too-intimate tales of teenage turbulence, Van Sant's film never makes you feel as though you've brushed up against something that – however truthful, however real – immediately sends you in search of a psychic scrub brush. Paranoid Park could be seen as a warning against leaving behind the (relatively) safe confines of youth too early, but that seems a tad facile to be coming from Van Sant, one of a very few American underground directors who's survived a running of the Hollywood wolves (via Good Will Hunting) and then returned to his more artful roots with integrity and credibility intact. At its frightened core, Paranoid Park is about the bridge of guilt that spans the crossing between innocent and innocence lost, kids and adults, however and in whatever form it may arrive. From a strictly filmmaking standpoint, it's unique and brutal in its beauty and the truth it tells, and so, too, is Van Sant's visual style, which visually shuffles VHS, Super-8, and 35mm alongside an equally nonlinear tale that features a cast of young people chosen almost entirely from the ranks of MySpace.com (most of whom, to judge from their performances here, are destined for bigger, if not greater, things). Paranoid Park shows the Portland-based director to be working at the pinnacle of his art in every frame, in every composition. It's breathtaking, heartbreaking, tragic, gorgeous, and true all at the same time.