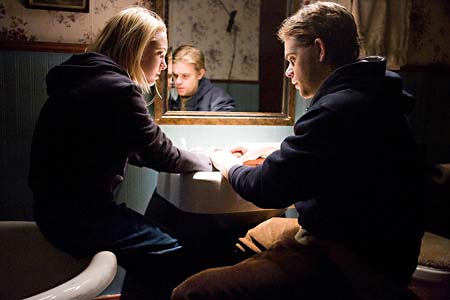 In the movies, if you’re the kind of character who’s spent his entire life getting beaten, scorned, or just simply ignored, very likely you’re going to be living in a dismal apartment building next to a dismal factory or grain silo in some dismal town in the middle of nowhere. Ideally, the season would be winter when your story begins, and a thin coating of gray snow would cover the ground. This is the world of James Reedy (Stahl), a chronic introvert (the kind of man whose hands are always in his pockets) who spends his days working on a construction crew and his nights staring at the television. When the husband of his equally distraught but far more vocal sister, Joleen (Theron), is arrested for growing marijuana in his back yard, she and her 12-year-old daughter, Tara (Robb), move into James’ apartment. They don’t ask permission; they just walk in and take over. Joleen knows James won’t make a fuss. These events take place in the opening minutes of Sleepwalking, and their modesty and psychological detail have the air of true life about them. Watching James stir awkwardly on the couch when Joleen returns home drunk to have sex with a nameless truck driver, I marveled at Stahl’s ability to elicit both pity and disgust from his audience with barely a look. And Theron, who has become the Lon Chaney of her generation – a chameleon so versed in disappearing into roles at this point that I hardly recognized her when the movie started – projects all the contradictions of a woman who’s used to getting bad breaks from men but still holds out hope for that one golden tryst that will end in love. Unfortunately, Sleepwalking isn’t content being a character study of damaged adult siblings (if it were, it would have made a nice companion piece to Kenneth Lonergan’s You Can Count on Me, which is a far less sobering, but far more effective, movie). Instead, Joleen disappears 15 minutes into the film, leaving Tara in her brother’s incapable hands, and soon James and Tara are off on a road trip across the snowy plains of upper Middle America, running from social services and their haunted pasts and incrementally giving into their shared desire for understanding and friendship. It’s a cross-generational trip toward redemption through the thick brambles of the past, but neither Maher nor screenwriter Zac Stanford is comfortable enough with the murkiness of human psychology to make a very convincing case for James’ transformation from pitiable schnook to master of his destiny. As the film’s title implies, James is a man who treads impassively on the outskirts of life, like a specter, and no three-day drives or spontaneous acts of bravery are enough to save him – or this movie – from a slumberous fate. 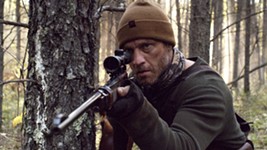 Hunter Hunter
Is that a wolf’s howl, or something worse? 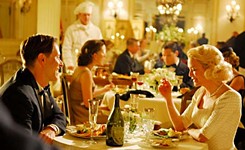