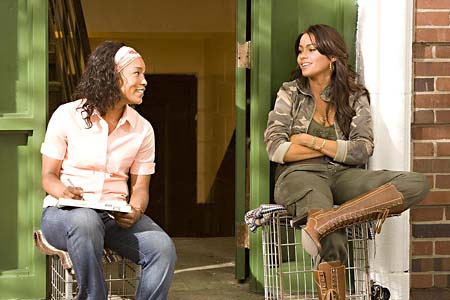 Tyler Perry, the one-man cottage industry that produces a prodigious number of films, theatre, and television works aimed almost exclusively at African-American audiences, has become a brand unto himself. Just as you acquire a sense of what to expect when going to a "Disney movie," you also know what you're signing up for when attending a "Tyler Perry film": crass but wholesome stories about modern black family life that mesh comedy, melodrama, and Christian uplift – and include his name in the title. Meet the Browns also highlights another of Perry's recurrent themes: scorn for black men who don't do right by their families and baby mamas. The casting of Bassett as this film's lead has probably earned Perry the best actor he's featured in any of his movies so far, and although she's terrific to watch, she can't raise Meet the Browns from the doldrums in which the film wallows. She plays Brenda Brown, a single mother who is raising three children (by three different fathers) in Chicago public housing and having a difficult time of it. She loses her job and can't pay the bills just as two lovely coincidences occur: Her talented son, Michael (Gross, from Perry's TV show House of Payne), garners the attention of handsome basketball scout Harry (Fox), who is also clearly interested in recruiting mom along with son; and she receives plane tickets to rural Georgia to attend the funeral and reading of the will of the father she has never met. Once in Georgia, some fish-out-of-water comedy ensues as she gets to know the colorful Brown family: The fashion-challenged buffoon, Leroy Brown (David Mann), and his daughter, Cora (Tamela J. Mann), make strong impressions as they rattle off nonsense like "last will and testicle" and other clownish routines. The problem with Meet the Browns is not really the story but, rather, the slapdash mechanics of Perry's storytelling. His visual style aspires to nothing more than rudimentary point-and-shoot blocking, and his storytelling bounces radically between low comedy and high melodrama, while excising any fluidity or plausibility that might bridge the two contrasts. For example, a character getting shot in the back is followed in the next sequence by the image of him playing basketball. Moral: guns, basketball = interesting; hospital beds, recovery time = dull, and therefore unnecessary. Perry tosses everything at his disposal into his movie gumbo, even a completely gratuitous appearance by his signature, self-performed, alter-ego in drag Madea – most likely to set up the premise for his next film, Madea Goes to Jail.