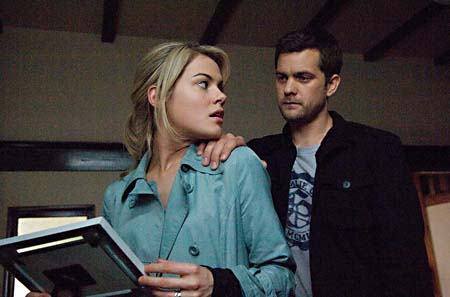 The best cinematic ghost stories, the real nail-gnawers, are the ones that insinuate themselves truly, madly, and deeply into your psyche and then leave you nightly eyeing your late grandmother's armoire de mariage as though Heather O'Rourke and the dead tot from Pet Sematary were grinning within, just waiting for you to slip into slumber so they can seep through the keyhole and proceed to reacquaint you with the never-ending hellscapes of 15th century Dutch master Hieronymus Bosch. (Bosch being Bosch, he'll probably turn up as well, looking like Danny DeVito's Penguin sans eyeballs.) That's what is known as getting some heebie-jeebies, and it is an experience to be savored. M.R. James, Arthur Machen, and E.A. Poe could do it in prose, and both King and Kubrick's Shinings jangled. But apart from the unexpectedly nifty shock of, say, Neil Gaiman's Coraline or Alejandro Amenábar's The Others, books and movies are no longer all that committed to the turn of the screw or the squeal of the hinge. In the past two decades, very few filmmakers outside of Asia have been able to overwhelm audiences with anything other than a chain saw and a zombie. Thus, Hollywood has recently found staples in remaking the Asian horror films of Takashi Shimizu (Ju-on: The Grudge), Hideo Nakata (Ringu), and Kiyoshi Kurosawa (Kairo – recently spayed and neutered by Wes Craven, who should know better, and the Weinsteins, who just don't seem to care anymore). And that brings us to Shutter. This is Japanese director Ochiai's Americanized-yet-shot-in-Tokyo do-over of Thai filmmakers Banjong Pisanthanakun and Parkpoom Wongpoom's sublime, melancholy, and ultimately ghastly (and identically titled) 2004 T-horror take on Franco Zeffirelli's Endless Love by way of Antonioni's Blow-Up. Masayuki's "photo-mortage" (a couple sees mysterious images in photographs) suffers from the presence of everyone but the ghostly Okina (also seen stateside in The Grudge lite) and some shivery camerawork from the masterful eye of director of cinematography Katsumi Yanagijima – a favorite of both Takeshi "Beat" Kitano and Kinji Fukasaku (Battle Royale). But the very Thai-specific charms that made the original Shutter such an unforeseen, unpredictable delight when I first saw it – and when I screened it again, last night – are almost entirely absent here, eclipsed by the annoying blond highlights of Taylor, ex-Transformers babe and forever, as the Thai say, farang. New rule: No more Asian-horror remakes until everyone outside of Asia has seen the originals. I'm not kidding. 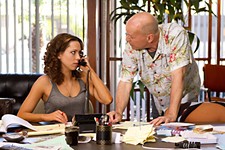 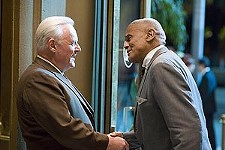