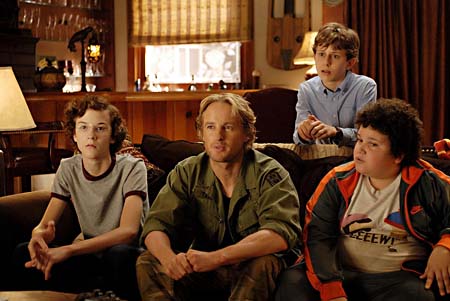 Much to my dismay, this is not an unauthorized sequel to Abel Ferrara's 1979 East Village art-world freak-out, Driller Killer. This is instead a dispiritingly mediocre tweener comedy from some very talented people who appear to be experiencing a delayed sophomore slump. With Judd Apatow's (Knocked Up) name hovering comedy-god-like over the titles and Seth Rogen (Superbad) credited as co-writer – not to mention the dependably dopey Owen Wilson as the titular borer du jour – you'd expect the laffs to positively gush forth like blue jokes ’n’ booze issuing from the maw of Buddy Hackett. Nuh-uh. Drillbit Taylor is a strange hybrid of Apatow's über-cool TV series Freaks and Geeks and 1980s My Bodyguard, a cool albeit little-seen film scripted by Children Shouldn't Play With Dead Things scribe Alan Ormsby. Drillbit Taylor is such an obvious rehashing of old ideas and laugh lines that it borders on the insulting. Hartley, Gentile, and Dorfman play Wade, Ryan ("T-Dawg" to his friends), and Emmit, a trio of freshman high schoolers who hire Wilson's ostensibly ex-Army maniac to protect them from local bully Filkins (Frost). These school misfits are the doppelgängers of Freaks and Geeks lead characters Sam, Neal, and Bill, right down to their skinny/fat/hypergeek physiognomies, and Frost's bully boy is patterned after every school-yard thug ever created, up to and including Matt Dillon's turn in My Bodyguard. Apatow and Rogen should note for future reference that stealing from the best doesn't count for squat if you're the best in the first place, although Wilson does get some juicy throwaway lines, as when he asks his young charges to look deep into his thousand-yard-staring eyes and then quotes blade-running Rutger Hauer: "I've seen things you wouldn't believe … attack ships on fire off the shoulder of Orion, C-beams glittering in the dark near the Tannhauser Gate." Coming from beneath Wilson's crooked schnoz and endless-summer hairstyle, it's one joke in a million, but it's also virtually the only one that works. 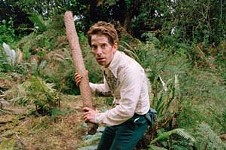 Without a Paddle
This yuck-fest gets its jokes from men's fear of homosexuality and impotence.