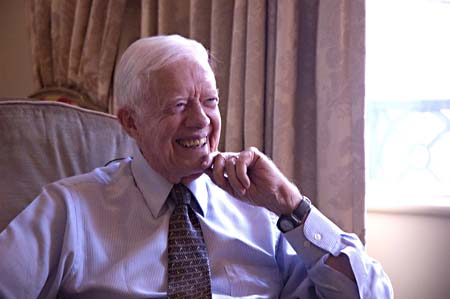 The title is as deceptively folksy as the man in question, who quotes the New Testament as easily as decades-old statistics on national oil consumption. Welcome to our 39th president – you know, the peanut farmer – who continues to reside in his family home in Plains, Ga. (population 600), in between touring the globe as our most esteemed elder statesman. Demme – who throughout his career has hopscotched from narrative features like The Silence of the Lambs to documentaries like Stop Making Sense – settles on a narrow scope here as he follows Jimmy Carter on his 2006 book tour, in which he promoted, and more frequently defended, his most recent title, Palestine: Peace Not Apartheid. Yup, them’s fighting words, quite intentionally; as Carter explains again and again in radio, TV, and print interviews, his goal was to spark an international debate. Some debate he gets, along with a whole lot of public outcry, especially within the Jewish community (including a war of words with celebrity lawyer Alan Dershowitz). By dint of the film’s structure – the camera goes from airport to airport, interview to interview – Man From Plains suffers somewhat from a feeling of sameness (which provides a not-uninteresting lens on what book-tour fatigue must feel like), and when controversy is injected late in the film – accusations of plagiarism and a closed-door meeting with a council of Phoenix rabbis – Demme treads too lightly. Still, it’s an intriguing historical document, not attempting a completist portrait of Carter but rather a series of candids: This is the former president recounting a long-ago ride in a Rolls-Royce; there he is kneading his forehead with exhaustion. In the film’s most strangely affecting moment, we watch a make-up artist for the Tavis Smiley show devotedly rub lotion into Carter’s hands: It is a sight to behold. Demme and his small team of camera operators have a special talent for zeroing in on moments such as this, moments that are bolstered by a typically spot-on and internationally flavored soundtrack (including Gillian Welch, Brother Ali, and original music by Alejandro Escovedo). Perhaps Man From Plains’ most lasting impression: The pain of watching a president who, in addition to being trained as a nuclear physicist, actually knows how to pronounce the word, too.