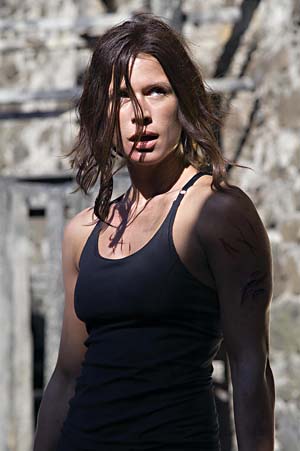 Doomsday writer/director Marshall seems to be running out of ideas or at least new ways to make old ideas fresh. The director of genre fan favorite Dog Soldiers (the one with the werewolves) and the genuinely claustrophobic The Descent (the one with the women) comes up short on Doomsday for the simple reason that there's not a lick of originality to be found anywhere in this film. A quick and dirty rundown of homages, lifts, steals, and "Hey, man, gimme that back!"s include John Carpenter's Escape From New York, John Carpenter's Ghosts of Mars, Mario Bava's Planet of the Vampires, The Stand, Damnation Alley, Aliens, 28 Days Later, 28 Weeks Later, the Resident Evil and Mad Max franchises, and, just to make things interesting, Sophie's Choice. That's a lot of cine-library late charges Marshall's wracking up, but his filmmaking technique – antsy, gliding camera movements punctuated by sudden, extreme moments of gore or explicit character revelation – is still in fine fettle. It's powerful stuff when it works, and it works more than you'd expect. After a here-and-now prologue sets up the main storyline – a deadly "Reaper" virus lays waste to Scotland, and the British government seals off the entire country – the action jumps ahead to 2035, as Maj. Eden Sinclair (Mitra) is tasked to enter Glasgow in search of survivors who may hold the key to a cure for the virus, which, not surprisingly, has just turned up again in London. What follows should feel like a sci-fi-actioner-by-committee but somehow doesn't. To his credit, Marshall has a gifted eye for pseudo-poetic, anti-authoritarian violence and, this time out, a somewhat more stellar cast to match. Neither Hoskins nor McDowell provide anywhere near as much fun as do Marshall's frequent, borderline subversive sequences of government troops mowing down hapless civilians whose only apparent crime is being Scottish. Doomsday may not have anything new to bring to the gallows, but what it does have is Marshall's deadly serious tone (one suspects Marshall could direct Robin Williams and Christopher Walken in Waiting for Godot and come out of it with his genre cred intact). Marshall, like his characters, does not mess around: Good people do bad things to not-entirely bad people while the Man (in this case No. 10 Downing St.) seeks ways to screw everyone. 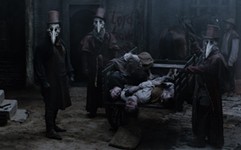 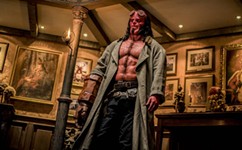