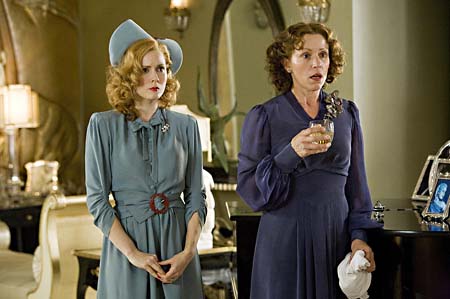 Miss Pettigrew Lives for a Day

The Blitz was not all chip-rationing and stiff-upper-lipness for the Londoners who endured it – there was also the West End, gin, and the promise of non-Nazi-induced blackouts and sasstacular American movie stars, or at least that's what we have here. As Miss Pettigrew, the unflappable, always appealing McDormand submerges her sense of style and her not inconsiderate wit into the titular character first created by novelist Winifred Watson in 1938. Miss Pettigrew is an unemployed nanny with a no-nonsense streak and an exceedingly dour sense of couture, who bluffs her way into a job as the "social secretary" for the brain-dead, proto-fashionista, Yank-on-holiday starlet Delysia Lafosse (Adams, of Junebug and Enchanted), with appropriately hilarious results. Or maybe not so hilarious, depending on how you feel about P.G. Wodehouse's Jeeves and Bertie stories (which are echoed here), madcap screwball comedies of the Thirties (ditto), and Adams' relentlessly chipper perkiness, which would threaten to tip over into outright self-parody were one not already aware of what a talented comedienne she can be. Watching Adams bat her eyes, grind her hips, and befuddle herself betwixt the revolving cast of semieligible suitors (Pace, Strong, Hinds) who wander pre- and postcoitally into her widespread and indiscriminate arms as she vies for financial security, love, and a plum theatrical part (although not necessarily in that order), is great fun: "What ho, Jeeves!" indeed. (However, watching McDormand read the Manhattan white pages to herself in a dark room would, one suspects, be even more entertaining.) Adams titillates, but McDormand fascinates, an important distinction. That Miss Pettigrew, apparently a closed circuit from the start, should in the end outshine her bubble-headed charge, a real live wire from the get-go, is less a shocking discovery than the starting-off point for a swell stage play or, as here, a novel from the prefeminist trenches. The comedic success of this pair of dramatic archetypes, the radiant flibbertigibbet and the gray, lumpen elder spinster, in a lightweight bit of piffle such as this is a testament to both Adams' and McDormand's smarts. It's tough to play dumb when you're not and even more difficult to dial down your own innate brilliance. 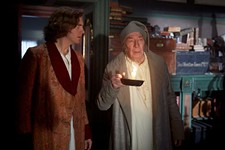