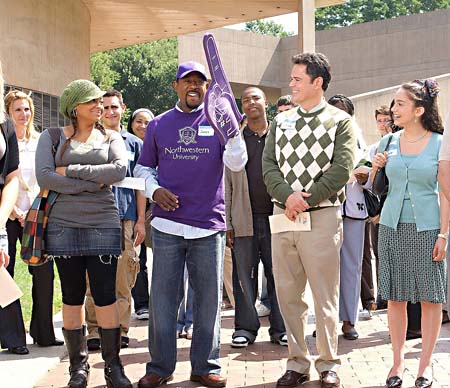 College Road Trip is that movie rarity these days – a G-rated film that isn’t a documentary or an animated feature. A Disney production that would seemingly be more at home on the Disney Channel than in the local multiplex, this formulaic family comedy about father-daughter relationships follows a predictable path from start to finish, although some silly business with a hopped-up pig high on coffee beans provides some unexpected comic relief about halfway through. The film’s script (credited to four writers, no less) pits university-bound Melanie (Raven-Symoné) against her overprotective father (Lawrence) in the selection of her future alma mater. Daddy wants his baby girl to attend nearby Northwestern University so that he can keep an eye on her, while she wants to attend faraway Georgetown University to pursue her educational dreams. A college road trip ensues, during the course of which daddy learns to trust his daughter, who in turn learns to appreciate a father who loves her so much. It’s enough to warm the cockles of your heart, except for the fact that none of this mawkishness feels real in the least. Like other film and television productions of this ilk, there’s a glossy sheen to College Road Trip that constantly reminds you the world it inhabits is one of make-believe. What this film needs is some off-the-chain comic relief to temper its mediocre storyline, but unfortunately, most of the film’s energy is expended by Lawrence and Raven-Symoné in a contest to see who can out-mug the other. It’s a dead heat between the two, with the dark-horse winner being a supporting player whose idea of being funny is to make a complete fool of himself: As a show-tune-singing and perpetually upbeat father also accompanying his equally annoying daughter on a college road trip, Osmond is all teeth and no talent. You’d think that his presence here might provide an opportunity for some tongue-in-cheek humor at his expense, but Osmond plays the comedy so darn straight that it’s painful to watch. Somebody get this guy a job doing dinner theatre, where he can do no harm. 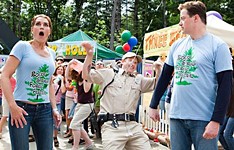 Just Friends
A tepid romantic comedy with a side order of vitriol.