Movies about Iraq war veterans have recently proved to be about as deadly at the American box office as an IED explosion. That’s really a shame because the public is passing over a lot of really terrific, informative, and insightful films despite good reviews, word of mouth, and Academy Awards (four out of five of this year’s Best Documentary nominees were Iraq docs). Badland, however, is one well-meaning but overblown drama about an American vet with post-traumatic stress disorder that ought to stay in the foxhole. Despite its two-hour-and-40-minute running time, the film lacks insight or depth and puts the viewer in the difficult position of identifying with its protagonist, troubled vet Jerry (Draven), who shoots to death his pregnant wife and two sons before going on the lam with his surviving daughter and seeking redemption and a false identity in a new town. It’s a tough sell, and it doesn’t help that Jerry, who is traumatized by the memory of “My Lai-like” activities in Fallujah and his dishonorable discharge, has a nasty boss who is inexplicably framing him for theft and is married to an insensitive, thieving harpy (Shaw). The shorthand of these stereotypical characterizations is maintained throughout the film. Not even Jerry comes in for the kind of psychological analysis that such a desperately disturbed individual cries out for. Daughter Celina (Fulton) is spared from her father’s rampage seemingly because of the purity of her love for him, a faith that's so strong that it seems hardly fazed by witnessing her father’s annihilation of her family (unless Lucente is saving Celina’s PTSD for the next installment in the saga). Badland is the vision of writer/director/editor Lucente, whose writing and directing might improve with the inclusion of an outside editor. Almost every scene in the film could be easily trimmed, and it would have more impact as a 90-minute drama. Instead, Badland revels in slow, panoramic landscape shots; images of people looking enigmatically into the distance; and lots of dramatically unnecessary footage. We’re an hour-and-a-half into the movie before acting ace Morton comes on the scene as a troubled reservist who returns from Iraq to his old post as town sheriff. And if you think the film has crescendoed at the predictable climax, then you’ll be caught even more off-guard by the cheap shock coming in Badland’s closing sequence. The long landscape shots (and even many of the dramatic sequences) are further puffed up by Ludek Drizhal’s melodic but overblown score that might be better suited to a stand-alone symphony than a supportive soundtrack. Badland’s only commercial potential lies in the possibility that people may confuse it for Terrence Malick’s incomparable Badlands. 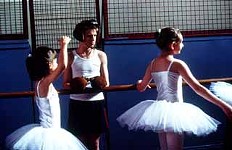