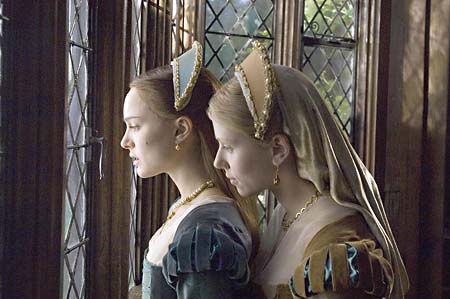 The Other Boleyn Girl

Oh, for the spare, sartorial flash and conspicuously consumptive Reformation rock of the House of Tudor, the most scandalously enlightened of all of England's dynastic monarchies. Between Henry VIII's 16th century turbulent connubial antics – forever seeking a male heir, he famously tallied up six wives: "Two beheaded, one died, two divorced, one survived," as my high school crib sheet had it – and his break with the Holy Roman Empire and subsequent creation of the Church of England, this chapter of British history has long been rich in drama (queens and otherwise). So it should shock no one that The Other Boleyn Girl, adapted from Philippa Gregory's novel, resembles a tragicomic reality show imported from some other, more fashion-forward past. (Sofia Coppola's Marie Antoinette exploited similar pseudo-historical parallels to ultralouche effect and very nearly succumbed to a terminal case of cool in the process.) Done in high style but with a far more serious attention to detail, if not the historical record, Johansson plays Mary, the titular sibling to Anne (Portman), whose socially ambitious father, Sir Thomas Boleyn (Rylance) seeks to marry off (or pimp out) the more spirited Anne to Bana's Henry VIII, whose current wife, Catherine of Aragon (Torrent), has been unable to birth an heir to the crown of England. As fate would have it, the king favors Mary over Anne and promptly beds this other girl, producing a male offspring almost immediately. Having borne the king a child out of wedlock, Mary is banished to the not-altogether-inhospitable English countryside, while a scheming Anne usurps both her own sister and Catherine of Aragon. Hilarity does not ensue. The Other Boleyn Girl works both as an engagingly sordid meditation on protofeminism and contemporized sisterhood set in a time and a place where either/or were grounds for, at the very least, defenestration. Director Chadwick and production designer John Paul Kelly (Tristram Shandy: A Cock & Bull Story) take pains to re-create the broody, conniving atmosphere of the court of Henry VIII (there's some impressively invisible CGI work going on in the background of several sequences), and the pairing of Johansson and Portman (besides being the wettest of fanboy dreamings) is deliciously inspired. They go at it, the two of them, with a sort of seething sibling gusto right up until the final fatal slice. Bana, who in the past has disappeared into roles and never quite returned (Hulk was nearly an event horizon for the actor), imbues Henry with enough conflicted emotions to give Bruce Banner pause; he lusts, he rages, he rapes, and ultimately goes emo on us, so heavy is the thorny crown atop his brow. At least, in the end, he still had a brow. 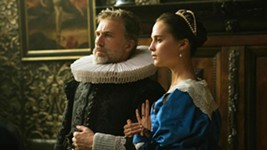 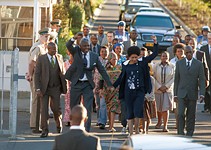 Mandela: Long Walk to Freedom
Idris Elba is spellbinding in this biopic that reveres the man but slights the movement.